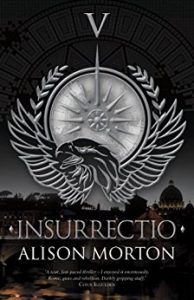 ‘The second fall of Rome?’
Aurelia Mitela, ex-Praetorian and imperial councillor in early 1980s Roma Nova, scoffs at her intelligence chief when he throws a red file on her desk. But it may be too late to save Roma Nova from meltdown and herself from destruction by her lifelong enemy.…

Early 1980s Roma Nova, the last province of the Roman Empire that has survived into the twentieth century, has problems – a ruler frightened of governing, a centuries-old bureaucracy creaking for reform and, worst of all, a rising nationalist movement with a charismatic leader who wants to destroy Aurelia.

Horrified when her daughter is brutally attacked in a demonstration turned riot, Aurelia tries to rally resistance to the growing fear and instability. But it may already be too late to save Roma Nova from meltdown and herself from entrapment and destruction by her lifelong enemy.…

INSURRECTIO is available from Amazon, iTunes and Kobo.

“Exploring the insidious spread of totalitarian ideals that undermine the social fabric of Roma Nova, INSURRECTIO is an excellent novel that builds to a fast paced, tense climax that keeps the reader on edge to the very end. Highly recommended.” – Elisabeth Storrs, author of the ‘Tales of Ancient Rome’ series

“Alison Morton’s INSURRECTIO is a triumph of the imagination. She uses her forensic knowledge of ancient times to create a Roma Nova that feels utterly authentic, populated by genuine real life characters. Roma Nova is under attack from within by a merciless dictator and only Aurelia Mitela has the strength to face him. But even Aurelia’s powers and principles are stretched by an enemy who seems to know more about her than she does herself. A brilliant helter-skelter mix of action and intrigue that hurtles to a bloody, heart-rending climax.” – Douglas Jackson, author of Gaius Valerius Verrens series

“Morton’s thrilling world-building is a masterclass in alternate history. You don’t just believe her version – you live every twist and turn.” – E M Powell, author of the Fifth Knight series.

Selected as indie Editor’s Choice by the Historical Novel Society, Summer 2016:
“Ms Morton returns to the world of Roma Nova in her series about an alternate history of Europe, where the Roman Empire survives as a small alpine country.

Aurelia Mitela has retired from her former military career and is a politician charged to serve, protect and guide the new Imperatrix, Severina – who is not the woman her mother was, and her weakness proves fatal. Aurelia must fight against the enemies of Roma Nova, to do what she knows is her duty even if it goes against everything she believes in.

Roma Nova does not exist, but from Ms Morton’s portrayal you are in doubt that this little state is not real. It is perfectly portrayed, perfectly explained, without feeling like a politics lesson. With a deft touch, Ms Morton gives us a matriarchal society that is not in any way a feminist stronghold, but just is.

Aurelia is a character the reader cares about. We smile when she smiles, we flinch when she flinches. Her progress through the story is not easy, and the reader is there every step of the way with her. She is surrounded by people that you have to feel something for, be it respect, liking or loathing. Love them or hate them, they are real, rounded and believable.

Technically not falling into the HNS boundary of a novel set pre-1960s, this story does have a firm place among the more straightforward idea of historical fiction because books such as this cannot be recommended highly enough. As long as you can accept the ‘what if’ premise of history, and that Ms Morton will put you through the wringer and your journey as a reader will not be easy, you will love this.”