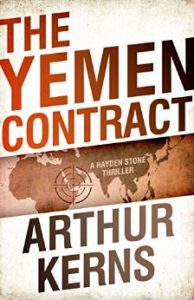 Once again CIA operative Hayden Stone has his work cut out for him. Abdul Wahab seeks to make a power grab in the exotic land of Yemen and establish a terrorist base from which to launch an attack on Europe.

Wahab lures Stone to Yemen by kidnapping his partner CIA officer Sandra Harrington in Sicily. Stone comfortably operates in the mysterious, exotic world of Yemen where tribal leaders vie for power with the central government, al Qaeda exerts its influence through murder and mayhem, and double-dealing among Bedouin and townspeople is a national pastime.

The cat and mouse game goes from the capital Sana’a, to the deserts in the far east of the country, and to the mountain villages in the north. Stone has a personal stake in this mission, but can never keep his eye off of the greater plot developing, the one that puts millions in peril, and that only he can stop.

THE YEMEN CONTRACT is available from Diversion Books.

You know that with Art Kerns’ FBI/CIA background he really knows what he’s writing about.”
M. A. Lawson award winning author of Rosarito Beach and Viking Bay.

Hayden Stone – part James Bond, part Jack Reacher, isn’t afraid to mix it up, but cleans up well in this action-packed, multi-layered romp through the African continent as he searches, literally, for a ticking bomb.
Robert Dugoni, New York Times Bestselling Author of Murder One and In The Clearing.

Kerns is a capable writer with a keen eye for local ambiance. The Washington Independent Review of Books

A modern thriller that echoes today’s headlines. Populated with fascinating characters and tightly plotted with twists and turns that will keep you guessing until the end …
–D.P. Lyle, Macavity-winning and Edgar- and Agatha-nominated author of the Dub Walker Thriller Series

Arthur Kerns is a retired FBI supervisory special agent with a career in counterintelligence and counterterrorism. He spent a year studying Arabic at the Defense Language Institute in Monterey, California. A past president of the Arizona chapter of the Association of Former Intelligence Officers (AFIO) his award-winning short fiction has appeared in numerous anthologies. He is a book reviewer for the Washington Independent Review of Books. Diversion Books, Inc. NY, NY published his espionage thriller, The Riviera Contract, and the sequel, The African Contract. The third in the series, The Yemen Contract, was released in June 2016.
See more in author’s website, www.arthurkerns.com