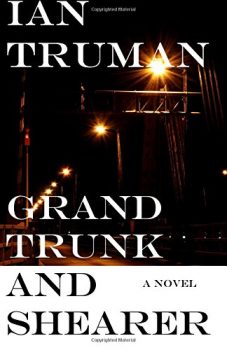 Ian Truman is from a working-class family and proud of his origins. A native of the East End of Montreal, he writes fiction about what he knows. With nineteen boroughs in the province of Quebec and a large inland port, Montreal is a storyteller’s dream location.

The definition of noir is working-class tragedy and GRAND TRUNK AND SHEARER has it aplenty. The novel opens with every person’s nightmare: a phone call in the dead hours of night. D’Arcy Kennedy grasps the phone and hears, “Cillian’s in the canal.” His brother’s body is stuck in the pillars under the bridge. The police write off Cillian’s death as accidental. D’Arcy knows better. And he and a trio of friends are going to prove it. The quest takes them to notorious neighborhoods where they encounter skinheads, a racist organization, former gay bashers, the Irish mob, and the MMA circuit.

What was the genesis for GRAND TRUNK AND SHEARER?

Change and instability is a great setting for stories. GRAND TRUNK AND SHEARER is a street corner in Montreal. It’s the representation of a former working-class neighborhood being gentrified very quickly. It’s close to downtown and is being destroyed incredibly fast by glass towers and luxury condos. So there’s an incredible amount of pressure on the poor and the workers: people like me, my dad, and people we know—truck drivers, welders, warehouse workers, mechanics.

A place like Pointe-Saint-Charles is a unique setting in a unique time, which makes it a great place to set a story. It was one of the first places to be bilingual (French and English) in Canada. It was the Anglo (Irish, mostly) and Franco working class living together in this tiny, melting-pot neighborhood stuck between railroad tracks and a canal, shipping lanes, flour mills, and the port.

Your novel La Shop is in French and GRAND TRUNK AND SHEARER has English, French, and Gaelic. How do you balance different languages?

La Shop is a French translation of The Factory Line. I used chapters as homework in all my workshops in college. I worked on the translation for about a year later. It’s in what’s known as Joual French; an accent specific to Quebec. It’s not that far from Cajun because they were French settlers deported from Canada to Louisiana.

The story of The Factory Line is a true-ish account of life in a Montreal factory. My days in those workplaces happened in French, English, Spanish, Arabic, and Haitian Creole … that’s just the reality of Montreal and I try to incorporate it in my stories as much as storytelling arcs and language barriers will allow.

Mixing languages is probably easier in theater and film. The actors play out the accents. I found it really hard to integrate accents and languages. I sometimes stop to ask myself where the slang words go in order to make it as realistic as common speech. People will switch when the natural flow of the tongue warrants it or when you’re going into a new direction/idea.

How do you explain your unique voice?

I don’t know if it’s specific to Quebec or the Francophone school system here, but … there’s a lot of focus on folktales and oral storytelling in school. Aside from that, I really feel like storytelling was part of my surroundings. I’m working class, so when I’d be on jobs or in the shop, my dad or one of the guys would tell stories about people and jobs. It happened naturally through the entire work day and I loved it.

I use a lot of dialogue. Also, the way I write the body of the text feels like someone’s telling you the story. For the longest time I had a hard time explaining it, defining it, or understanding the process behind it. When I won the Expozine Award for Best Independent Book they pegged my voice as “down-to-earth raconteur” and I thought, “So, that’s what it is.”

You are a novelist, poet, artist, and musician. Do you have a day job as well? How do you carve your day for various creative pursuits?

My days are pretty full. I do have a day job and two daughters. Mornings are for the family, making breakfast and lunches, getting everyone to school and daycare. I work a warehouse for a university campus store. I eat my lunch on my first fifteen minute break. There’s this community theater across the street that doubles as a coffee shop. I write there on my lunch hour and make the most of it. I shell out as many words as I can. At that rate, I can write a novel a year. A few minutes at a time can add up to a lot. I really try not to let anything go to waste.

Every year, I try to have one significant artistic project. I always have paper around to write or sketch ideas out. Other times I edit or design. I’m no longer active in music per se. I like writing songs. But I figured that being in a band and touring was probably the worst kind of life imaginable.

When the shift’s done, it’s family time again until the girls are in bed. Then I answer e-mails or plan out a few things and start over the next day.

One last question. Yannick Trudel is a perfectly good name. Why Ian Truman?

I picked a pen name the way you pick a band name. I needed something that sounded good for the kind of writing I was expecting to work on. Ian is short for Yannick up here. I could’ve kept Trudel, but decided on Truman. If I had known Justin Trudeau was going to become a thing I might have stuck with my original name, who knows?

Ian, it was a pleasure meeting you. Thank you for spending time with us at The Big Thrill. 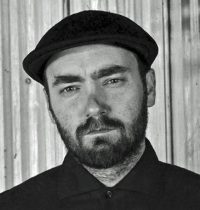 Ian Truman is a novelist, a musician and a visual artist. Born and raised in the East End of Montreal, he is a fan of punk, hardcore, hip hop, dirty realism, noir, satire and hopes to mix these genres in all of his works. A graduate of Concordia University’s creative writing program, he won the 2013 Expozine Awards for best Independent English Novel. He lives in Montreal with his wife and two daughters.

To learn more about Ian, please visit his website.