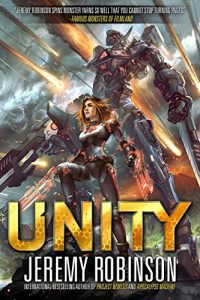 Euphemia Williams, known to her few friends as Effie, and everyone else as Eff-Bomb, will punch you for looking at her funny, for using her full name or for noticing that she’s a genius. But when an elite global entity known as Unity takes note of her intelligence and offers her a chance to escape the hum-drum life of a foster-child, she signs up. At best, she expects her time abroad to be a vacation. At worst, an actual challenge. But what she finds, upon being swept up in a futuristic transport, is far, far worse.

En route to a secret location in the Pacific, a meteor punches through the atmosphere triggering an electromagnetic pulse that sends the transport plummeting to the ocean. While fighting to escape the crash and climb onto an island beach, the meteor slams into the sea. A tsunami races across the island, pursuing Effie and her fellow survivors deeper into the volcanic island’s lush jungle.

Beaten, terrified and abandoned, the small group discovers that they are not alone on the island. The locals are ruthless and well-trained. With the survivors looking to her for leadership, Effie struggles—and fails—to keep everyone alive as they fight for survival.

Along the way, Effie uncovers a series of shocking truths: the parents she never knew were part of the island’s strange history, which includes massive robots known as Shugoten, and the meteor that sent them careening into the ocean, wasn’t a meteor at all.

The daikaiju have arrived—and one of them is headed her way.

Jeremy Robinson, creator of the ‘Kaiju Thriller’ genre, and international bestselling author of the Project Nemesis novel and comic book series, launches this new series combining the behind-enemy-lines themes of Red Dawn with the high-tech monster-fighting robots of Robotech, infusing it with his frenetic pacing and character driven plots.

UNITY is available from Amazon and Barnes & Noble.

“Robinson imagines the post-apocalypse like no one else.”
—The Novel Blog

“Robinson writes compelling thrillers, made all the more entertaining by the way he incorporates aspects of pop culture into the action.”
—Booklist

“Robinson just keeps getting better with every new adventure and monster he creates.”
—Suspense Magazine

“This is the stuff that comic books, video games and successful genre franchises are made of.”
—Kirkus Reviews

Jeremy Robinson is the international bestselling author of over fifty novels, including Apocalypse Machine, and Project Nemesis, the highest selling, non-licensed kaiju novel of all time. He’s known for mixing elements of science and mythology, which has earned him the #1 spot in Sci-Fi and Action-Adventure, and secured him as the top creature feature author.

Robinson is also the bestselling horror writer, ‘Jeremy Bishop,’ author of The Sentinel, and the controversial novel, Torment. As ‘Jeremiah Knight,’ he is a bestselling post-apocalyptic Science Fiction author. Robinson’s works have been translated into thirteen languages.

His series of Jack Sigler / Chess Team thrillers, starting with Pulse, is in development as a film series, helmed by Jabbar Raisani, who earned an Emmy Award for his design work on HBO’s Game of Thrones. Robinson’s original kaiju character, Nemesis, was also adapted into a comic book through publisher American Gothic Press in association with Famous Monsters of Filmland, with artwork and covers by renowned Godzilla artists Matt Frank and Bob Eggleton.