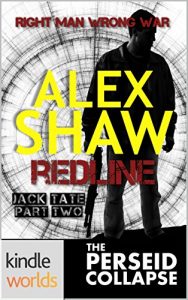 China has attacked the US with an EMP bomb, but China is not the only nation state threatening the ‘land of the free’.

Cloaked by chaos, a clandestine Russian operation is underway on US soil; but what is the mission objective? And what is their leader’s secret agenda?

Uncovering this plot, Jack Tate races to Washington to find his brother; but for the former SAS trooper, turned MI6 operative, things are never easy, today things will be deadly.

In Washington one diplomat is murdered and another is missing. Investigating this, as the EMP strikes, Metro PD Detective Jon Chang finds that he alone is left to follow the trail. But can Chang defeat the demons that have cost him his family, before the death toll rises?

Jack Tate and Jon Chang will be forever changed, as they fight to defy the odds in a battle they must not lose.

REDLINE is available from Amazon.

ALEX SHAW B.A.(Hons), P.G.C.E. spent the second half of the 1990s in Kyiv, Ukraine, teaching Drama and running his own business consultancy before being head-hunted for a division of Siemens. The next few years saw him doing business for the company across the former USSR, the Middle East, and Africa.

Alex is an active member of the ITW (The International Thriller Writers organisation) and the CWA (the Crime Writers Association). He is the author of the #1 International Kindle Bestselling ‘Aidan Snow SAS thrillers’ COLD BLOOD, COLD BLACK, COLD EAST and the new DELTA FORCE VAMPIRE series of books. His writing has also been published in the thriller anthologies DEATH TOLL, DEATH TOLL 2 and ACTION PULSE POUNDING TALES 2 alongside International Bestselling authors Stephen Leather and Matt Hilton.

COLD BLOOD, COLD BACK and COLD EAST are commercially published by ENDEAVOUR PRESS in English and LUZIFER Verlag in German.

Alex, his wife and their two sons divide their time between homes in Kyiv, Ukraine and Worthing, England. Follow Alex on twitter: @alexshawhetman or find him on Facebook.