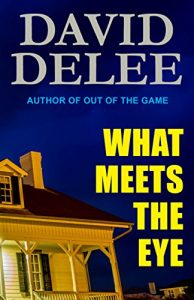 A young boy. Stolen cookies. An ordinary family with a deadly secret.

Accused of something he didn’t do, nine-year-old Tommy Hendrickson hires hard-boiled, tough-guy, private investigator Brice Bannon to clear his name and bring the real perpetrator to justice. Tommy’s offense—stealing cookies from the cookie jar.

But as Bannon tries to help, he learns the hard way no good deed goes unpunished when there’s more to the story than what meets the eye.

WHAT MEETS THE EYE is available from Amazon, Barnes & Noble and iTunes.

David DeLee is the author of the Grace deHaviland Bounty Hunter series, including the novels Fatal Destiny, Pin Money, With Intent to Deceive, and the just released Takedown. David’s also written many short stories featuring Grace, most notably Bling, Bling, which appeared in the anthology The Rich and the Dead edited by Nelson DeMille, and Fatal Tryst, an audio version of which is available for free from Crime City Central

David’s other work includes the novel Crystal White which SUSPENSE MAGAZINE called “…a dark portrayal of the evil that men–and women–can do.”, the second Nick Lafferty thriller Out of the Game and a collection of short stories called Murder, Mayhem & Mystery: An Omnibus of Crime Fiction.

David is a member of the Mystery Writers of America and International Thriller Writers. He holds a Master’s Degree in Criminal Justice and is a former licensed private investigator. A native New Yorker, David currently resides in New Hampshire. For more information be sure to check out his publisher’s website – www.darkroadpub.com and his website – www.daviddelee-author.com.