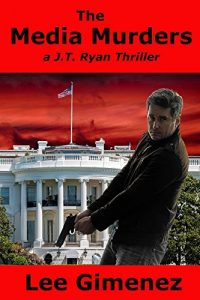 Before breaking an explosive story, a famous New York Times reporter dies under suspicious circumstances. Then a well-known TV reporter commits suicide. Suspecting foul play, the FBI’s John Ryan and Erin Welch investigate. As they probe the mysterious deaths, they uncover a shocking truth: Reporters are being murdered to suppress the news. More shocking is who they suspect is responsible for the killings. Can John Ryan and Erin Welch survive as they try to expose the conspiracy? Or will they be murdered by the assassins sent to keep them from revealing the truth?

Reviews for THE MEDIA MURDERS:
• “A riveting, page-turning thriller.”
• “Fast paced and exciting … one of the best books I’ve read this year.”
• “A mystery thriller that will keep you guessing until the last page.”
• “Explosive action. Crisp, witty dialogue. A fun ride.”
• “Snappy dialogue and cool, sexy characters.”

THE MEDIA MURDERS is available from Amazon.

Lee Gimenez is the award-winning author of 12 novels, including his highly-acclaimed J.T. Ryan series. His latest thriller, THE MEDIA MURDERS, was published in July 2016. Several of his books became bestsellers, among them SKYFLASH, KILLING WEST, and THE WASHINGTON ULTIMATUM. Lee was nominated for the Georgia Author of the Year Award and was a Finalist in the prestigious Terry Kay Prize for Fiction. All of his books are available in paperback and e-book versions in the U.S. and Internationally. Please join him on Twitter, where he has over 50,000 followers. You can also join him on Facebook, Goodreads, and LinkedIn. For more information about him, please visit his website at http://www.LeeGimenez.com.