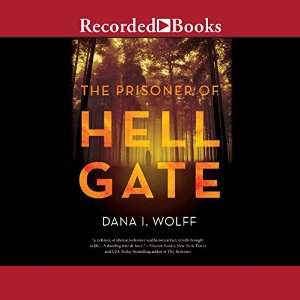 In the Hell Gate section of New York’s East River lie the sad islands where, for centuries, people locked away what they most feared: the contagious, the disfigured, the addicted, the criminally insane. Here, infection slowly consumed the stricken. Here, a desperate captain ran his doomed steamship aground and watched flames devour 1,500 souls. Here, George A. Soper imprisoned the infamous Typhoid Mary after she spread sickness and death in Manhattan’s most privileged quarters.

George’s great-granddaughter, Karalee, and her fellow graduate students in public health know that story. But as they poke in and out of the macabre hospital rooms of abandoned North Brother Island – bantering, taking pictures, recalling history – they are missing something: Hidden evil watches over them…and plots against them.

Death doesn’t only visit Hell Gate. It comes to stay. As darkness falls, the students find themselves marooned – their casual trespass having unleashed a chain of horrific events beyond anyone’s imagination. Disease lurks among the eerie ruins where Typhoid Mary once lived and breathed. Ravenous flies swarm puddles of blood. Rot and decay cling to human skin. And spiteful ghosts haunt the living and undead.

Soon five students of history will learn more than they ever wanted to know about New York’s foul underbelly: the meaning of spine-tingling cries down the corridor, of mysterious fires, of disfiguring murder, and of an avenging presence so sinister they’d rather risk their lives than face the terror of one more night.

THE PRISONER OF HELL GATES is available from Amazon.

“A rich mix of alternative history and historical fact, vividly brought to life with the writing chops and style of a seasoned pro…a dazzling tour-de-force.” — Vincent Zandri, New York Times and USA Today bestselling author of The Remains

“An instant classic. A tale where the horror is psychological as well as physical, and sneaks up behind you like a shambling corpse—or a vengeful killer.” — Allan Leverone, New York Times bestselling author of Mr. Midnight

“A classic horror story written with true literary flair. At once terrifying and mesmerizing, the richness of the language puts the reader into the scene with chilling precision. Stephen King, don’t look now, but Dana I. Wolff is breathing down your neck!” — Kitty Pilgrim, author of The Explorer’s Code

“A haunted island. So close to one of the greatest cities on earth and yet so hellishly far. What a wonderfully scary idea. The eerie hypnotic mood here is perfect as are the frights, the startling climax, and the amazing blend of history and fiction. I was reminded of Richard Matheson’s classic Hell House and have no doubt that this too will become a classic.” — David Morrell, New York Times bestselling author of Creepers and First Blood

“A voice that surprises you with its originality. A story that compels you to keep turning pages.A powerful horror novel that chills right to the bone.” — M.J. Rose, New York Times Bestselling author of The Secret Language of Stones

“The Prisoner of Hell Gate will be one of the hottest books this summer. …Beautifully written. …An old-time classic horror story.” — Amos Lassen

“This story of vengeance is atmospheric and spooky, with a pervasive sense of dread. …Creepy.” — Publishers Weekly

“Deeply atmospheric, The Prisoner of Hell Gate, is a book to savor. Not only is the writing excellent, but the history explored is utterly fascinating. The plight of the characters Dana I. Wolff so vividly portrays will linger in the mind long after the shocking conclusion. A can’t miss for fans of literary horror and anybody who loves a genuinely chilling tale.” — Daniel Palmer, USA Today bestselling author of Trauma and Forgive Me

Dana I. Wolff is my horror genre pen name. I also write mysteries and thrillers under the name J.E. Fishman. And I exist in the world as Joel E. Fishman, writer, reader, entrepreneur, husband, father, world traveler, occasional rider of horses, relentless swinger of tennis racquets, chef without portfolio, daily feeder of dogs, constant keeper of the pond.