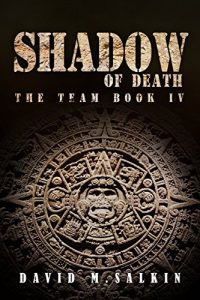 When deep cover CIA agent Apo Yessayan hears Spanish being spoken in northern Syria, he knows something evil is afoot. A new unholy alliance, between ISIS and a powerful Mexican drug cartel, will bring grave danger to the porous American border. Apo and The Team are called in for a covert special operation in Mexico against the cartels.

As Apo works his way into the underworld of the Mexican drug cartels for a face-to-face meeting with their leader El Gato, The Team is inserted by submarine to assault El Gato’s estate-fortress. Although the United States and Mexico have planned the capture of El Gato together, not everyone has the same agenda—and knowing who to trust means the difference between life and death.

SHADOW OF DEATH is available from Amazon.

David M. Salkin is the author of twelve published thrillers in various genres, including military espionage, crime, horror, science-fiction, action-adventure and mystery. His books have received Gold and Bronze medals in the Stars & Flags book awards, and David has appeared as a guest speaker all over the country.

David is an elected official in Freehold Township, NJ where he has served for twenty-three years in various roles including Mayor, Deputy Mayor, Township Committeeman and Police Commissioner.

When not working or writing, David prefers to be Scuba diving with his family. He is a Master Diver and “fish geek”, as well as a pretty good chef and wine aficionado. Some of his famous recipes were perfected in the parking lot of Giants Stadium.
1. The Team
2. The Team II – Into the Jungle
3. The Team III – African Dragon
4. The Team IV – Shadow of Death
5. Hard Carbon
6. Deep Black Sea
7. Dark Tide Rising
8. Deep Down
9. The MOP
10. Forever Hunger
11. Necessary Extremes
12. Crescent Fire