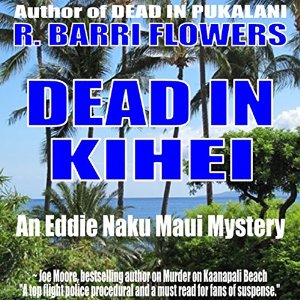 From award winning crime writer R. Barri Flowers and the bestselling author of the Murder in Hawaii Mysteries, comes the second book in the Hawaii detective series, Dead in Kihei: An Eddie Naku Maui Mystery.

Private investigator Eddie Naku’s latest case involves the apparent suicide of a friend and fellow private eye, Frank Iwamoto, who fell from the lanai of his 8th story condo to his death.

Naku refuses to believe Iwamoto was suicidal, in spite of evidence to the contrary. Proving he was murdered won’t be easy, but Naku is not about to give up. In the process, he comes up with a number of suspects, twists, and turns, as well as Frank Iwamoto’s risk-taking lifestyle that likely put him in harm’s way.

As Naku begins to get to the bottom of Iwamoto’s death, while juggling multiple cases and complicated romances, he finds his own life in peril.

Bonus material includes excerpts from the next book in the Eddie Naku Maui Mysteries, Dead in Wailuku; along with excerpts from the author’s popular Leila Kahana series novel, Murder on Kaanapali Beach, and his upcoming new Hawaii FBI series, Murder on the Big Island. Also included is the short story suspense thriller, Target of a Killer.

Dead in Kihei is the perfect follow up to Dead in Pukalani and will surely captivate readers in the spirit of Aloha.

DEAD IN KIHEI is available from Amazon, Audible and iTunes.

“A fine procedural along with appealing characters and great local color.” — Bill Crider, Edgar winner and crime writer on Murder on Kaanapali BEACH

“It gets no better than this! R. Barri Flowers has written another thriller guaranteed to hold onto its readers!” –Huntress Reviews on Dark Streets of Whitechapel

“Before He Kills Again is a rocket of a read. Not only a heart-thumping thriller, this is that rare novel that is downright scary.” — John Lutz, Edgar winner and bestselling author

“An excellent look at the jurisprudence system…will appeal to fans of John Grisham and Linda Fairstein.” — Harriet Klausner on Persuasive Evidence