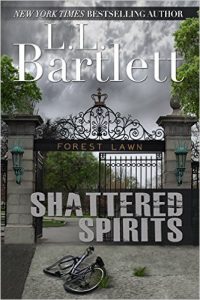 While riding his new racing bike, Jeff is hit by an SUV, an accident which has a cascade effect on his life. He loses his job to a replacement, his girlfriend pressures him to move in, his bank accounts are hacked, and a restless spirit begs for his help—all in less than a week. But it’s soon apparent that his so-called random accident is anything but, and the murder of a close friend has a hobbled Jeff on the run. Can he discover who’s out to destroy his life—and threaten those he loves most.

SHATTERED SPIRITS is available from Amazon, iTunes and Kobo.

The immensely popular Booktown Mystery series is what put Lorraine Bartlett’s pen name Lorna Barrett on the New York Times Bestseller list, but it’s her talent — whether writing as Lorna, or L.L. Bartlett, or Lorraine Bartlett — that keeps her in their hearts. This multi-published, Agatha-nominated author pens the exciting Jeff Resnick Mysteries as well as the acclaimed Victoria Square Mystery series, and now the fantasy series Tales of Telenia, was well as many short stories and novellas to her name(s).