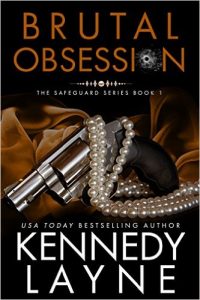 Keane Sanderson never thought he’d survive to see a day past his latest deployment with the United States Marines in Iraq. That was six years ago and he’s finally ready to ease off the accelerator. A unique opportunity to work for a top-shelf security and investigations firm in Florida is right up his alley.

Ashlyn Ellis had everything she’d ever wanted–a high-profile career as a federal prosecutor, an upscale apartment in the city, and a beach house for when she needed to decompress from all the stress that accompanied the job. All three are threatened when she realizes someone has been following her every move for a very long time.

When Ashlyn comprehends the lengths her pursuer is willing to take things, she calls in a favor. She never expected her plea for assistance to materialize in the form of Keane Sanderson–the one man who had every reason to revel in her misfortune. She’s finally given the chance to rekindle the flames of desire she never should have extinguished, just in time for it all to be taken away when the stalker takes his obsession a step too far.

BRUTAL OBSESSION is available from Amazon, Barnes & Noble and iTunes.

“When it comes to heart-stopping suspense, there’s no one quite like Kennedy Layne!” New York Times bestselling author Lexi Blake

Kennedy Layne is a USA Today bestselling author. She draws inspiration for her military romantic suspense novels in part from her not-so-secret second life as a wife of a retired Marine Master Sergeant. He doubles as her critique partner, beta reader, and military consultant. They live in the Midwest with their teenage son and menagerie of pets. The loyal dogs and mischievous cats appreciate her writing days as much as she does, usually curled up in front of the fireplace. She loves hearing from readers—find out how to connect with her at www.kennedylayne.com.