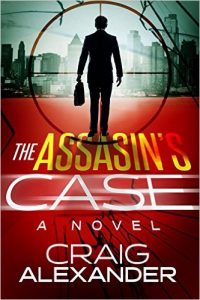 For twelve years former FBI agent Grant Sawyer has longed for the day when he can reap vengeance on the man who murdered his family. When he foils the theft of a briefcase containing an exotic biological weapon, he gets his chance.

“Craig Alexander’s latest is a page-turning thriller that is a bold mix of Biblical themes and mainstream grit. Alexander takes the reader on a thrill-ride exploration of the need for vengeance and its effect on the body, mind and soul.” Jeremy Robinson – the #1 bestselling Action-Adventure and #1 bestselling Science Fiction author of more than thirty novels including his runaway indie hit RAGNAROK, ISLAND 731, PROJECT NEMESIS, SECONDWORLD, THE ANTARKTOS SAGA, and the exciting Jack Sigler series.

THE ASSASSIN’s CASE is available from Amazon.

CRAIG ALEXANDER is a member of the International Thriller writers and served two consecutive years as a judge in their best hardcover novel competition. His first novel, The Nineveh Project, was honored with a best of Mississippi award.

He holds black belts in Tae Kwon Do, Hapkido, and Han Mu Do, and has studied many other styles. He is an instructor at Sun Bi Martial Arts in Madison, MS and has competed and trained internationally.
He loves to play tennis, watch good movies, and of course read.

He lives in Mississippi.

Brutal Obsession (The Safeguard Series, Book One) by Kennedy Layne