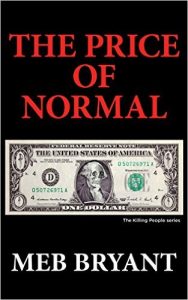 THE PRICE OF NORMAL by Meb Bryant is a psychological thriller about a diagnosed sociopath who wants to experience normal. Can a sociopath abandon his natural instincts? He uses several names but never his own since his death twelve years ago. Others have labeled him as a sociopath and he accepts that term and credits the sociopathy for his business success. Although he wants to change and be like normal people, he believes only the perfect woman can make that happen. While scouting a football game to feed his appetites, he spots her, and there’s no doubt in his mind that she’s The One. He executes the perfect plan to kidnap her and take her to his place in the country…to have and to hold till death do them part. Unfortunately for him, the people who care for her won’t let that happen.

THE PRICE OF NORMAL is available from Amazon.

Meb Bryant, a native of Texas, grew up traveling across the United States and never lived in a location longer than two months while her father helped build gas pipelines in the Deep South and Alaska. She attended fifteen schools by the age of ten and blames the nomadic lifestyle for her deep-rooted conspiracy paranoia. Meb hides behind the façade of being normal by writing thrillers such as The Price of Normal, the story of a sociopath seeking change. So far, she’s gotten away with it.