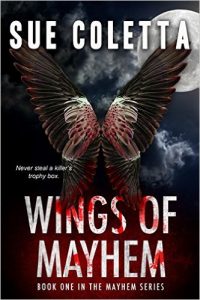 Shawnee Daniels – cybercrimes specialist by day, cat burglar by night – ignites the hellfire fury of a serial killer when she unknowingly steals his trophy box.

A SERIAL KILLER STALKS THE STREETS…

Shawnee Daniels always believed her “fearlessness rules” mantra would keep her on top and out of jail. When she hacks a confiscated hard drive at the Revere P.D., she focuses on a white-collar criminal accused of embezzlement. To teach him a lesson and recoup the funds she breaks into his massive contemporary in Bear Clave Estates. Jack has even more secrets, deadly secrets, secrets worth killing over.

A CAT BURGLAR PICKS THE WRONG HOUSE TO ROB…

Shawnee thinks she made it out clean until a deadly package arrives at her door soon after. He’s found her. As a glowing eagle taunts her Skype screen, Jack tells her she stole his precious trophy box — and he wants it back!

When her “helpful” best friend convinces her to date charismatic Detective Levaughn Samuels, her two worlds threaten to implode. Ordinarily Shawnee keeps a firm line between her professions, but dating Levaughn might help her get this psycho off her tail.

AND NOW, NO ONE IS SAFE…

In this lightning-fast-paced psychological thriller of secrets and lies, Shawnee juggles being stalked by a serial killer, dating the lead detective on the case, and tap dancing around her librarian best friend.

If she doesn’t find the trophy box, the killer’s coming for her. If she doesn’t expose her secrets and lies, more will die. And if she does, she could lose her freedom and everyone she holds dear.

WINGS OF MAYHEM is available from Amazon, Barnes & Noble and iTunes.

“For someone not named Patterson, Harris or Lindsay, Sue Coletta has reinvented the serial killer genre without stepping over the tropes for which we flock to it. In “Wings of Mayhem,” she gives us a “Silence of the Lambs” style yarn that takes us into not one, but two criminal minds: one a twisted psychopathic genius hell-bent on sending sickly cryptic messages through the flesh of his victims (the plot recalls the latest season of “The Following” starring Kevin Bacon, which gave new meaning to “twisted” while being something you could not look away from), the other being our protagonist, who moonlights from her day job (I won’t rat that out here) as a cat-burglar who stumbles into the wrong crib, stealing the aforementioned serial killer’s fetishized “precious.” There is hell to pay for them both as a result.

The story spins ahead with escalating velocity and well-rendered literary layers, always leaving the reader pleading for more information while delivering just enough with exquisite timing, always nailing a clear and rationale dissection of what seemed in the moment like insanity or illogic. The craft of the writer is on display from page one, with intense pacing, deeply drawn characters and a matrix of plot elements that never lets you see the big picture as completely as you think you do, thus setting up an ending that demands you stick with it until the final, unexpected twist.

You think you get it, but you don’t. And when you do, you’re delighted that you didn’t.

Sue Coletta is on a path. She earned her ticket into the crowded arena of dark thriller contenders with her previous novel (“Marred”), and in “Wings of Mayhem” she announces her arrival with the wail of approaching sirens and the quiet horror of a blade swinging at your throat in the dark. Don’t miss this one. A star is born.” ~ Critically acclaimed author Larry Brooks

Member of Mystery Writers of America, Sisters in Crime, and International Thriller Writers, Sue Coletta is always searching for new ways to commit murder…on the page. She’s the author of Wings of Mayhem, Marred, Crime Writer’s Research, and 60 Ways to Murder Your Characters. She’s published in OOTG Flash Fiction Offensive, Murder, USA anthology, InSinC Quarterly, and in the upcoming dark fiction anthology, RUN. The founder of #ACrimeChat, which takes place every Wed. on Twitter, Sue also runs a popular crime resource blog, where she shares her love of research…forensics, police procedures, serial killers, and true crime stories. You can learn more about Sue and her books at: www.suecoletta.com