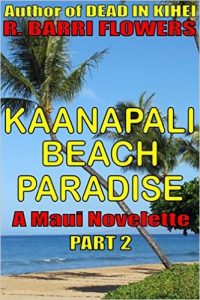 Multimillionaire real estate investor and CEO of Kaanapali Palms, Ben Crawford, is not above getting in bed with organized crime to make his dream come true. A widower, his 19-year-old daughter, Leigh, means everything to him. Forgotten is the child he abandoned long ago, never imagining this would come back to haunt him.

Leigh Crawford is gorgeous, spoiled, precocious, and primarily looking to have fun at her daddy’s new luxury hotel. After meeting super-hot Hawaiian chauffeur, Masami, things get hot in a hurry. Will they crash land or could there actually be a future for them?

Yoshiko Pelayo is a stunning Hawaiian journalist, who has taken a job in housekeeping at the Kaanapali Palms while plotting vengeance against Ben Crawford, the father she never knew.

Stewart McGann is a retired police detective from Portland, Oregon. After getting hurt on the job, he is brought to Maui to head the security at Kaanapali Palms. The offer is made easier by his attraction to housekeeper, Yoshiko, even if he senses there is more to her than meets the eye.

Kalani and Rosita Okamura own the fabulous Shoreline Lounge in Kaanapali, while hiding secrets of adultery from one another and more.

Genevieve Roswell, an aspiring musician, fled San Francisco after testifying against her drug dealing boyfriend and ended up on Maui. Now her past is about to catch up to her.

Donnie Ortega has a job to do–make sure the one who helped put his homey away gets what is coming to her. And he fully intends to complete the task, whatever it takes.

Eugene Keebler is a janitor at the Kaanapali Palms and a smalltime hood. He sees the grand opening as a golden opportunity to rob the place, with the help of his crooked friends.

Kaanapali Beach Paradise, Part 2 in this continuing series, promises to keep readers engaged as lives and loves are turned upside down with intriguing twists at every turn amidst the grandeur of a world famous Hawaii beach resort.

“Forever Sweethearts is a wonderful and nostalgic love story that reminds me of such moving tales as Bridges of Madison County, Summer Harbor, and The Notebook.” — Barnes and Noble reviewer