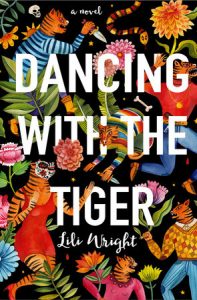 When Anna Ramsey, a 30-year-old American with a history of bad choices, learns that a meth-addicted looter has dug up what might be the funerary mask of Montezuma, she books a flight to Oaxaca. Determined to redeem her father, a discredited art collector, and to one-up her unfaithful fiancé, a museum curator, Anna hurls herself headlong into Mexico’s underground art world. But Anna is not the only one chasing the treasure. There’s the ruthless, dying drug lord who will stop at nothing to own it; a secretive expat American collector, who keeps his art locked in a private chapel; a Mexican gardener who needs cash to escape with his teenage lover; and Salvador, the sensual and mercurial painter with a hidden agenda of his own. As the mask shifts hands, Anna falls deeper into danger. Written in taut, lyrical prose, DANCING WITH THE TIGER is a riveting exploration of the masks we wear, the secrets we keep, and the revelations we owe to those we love.

DANCING WITH THE TIGER is available from Penguin Random House.

* “A fast-moving [and] intricately wrought thriller. Clearly written with great care, the novel plumbs the depths of love and obsession in complex yet delicately woven themes… [a] journey of self-discovery [set] within a powerful story full of danger and pathos.”—Booklist (starred review)

“Fantastic…a fresh, non-stop story that will appeal to fans of all types of suspense fiction.”—Suspense Magazine

“An entrancing, provocative, and utterly beguiling debut. Like its heroine, Lili Wright’s Dancing with the Tiger is so vibrant and alive you can practically feel the pages humming beneath your fingers. Not to be missed.” —Megan Abbott, author of The Fever

“A gripping and powerful story of artifact smuggling and drug dealing in Mexico, driven by Lili Wright’s deep compassion for the people and place she writes about.”—Jess Walter, author of Beautiful Ruins

Lili Wright is author of “Dancing with the Tiger,” a literary thriller set in Mexico, and the travel memoir, “Learning to Float.” Her essays and journalism have appeared in The New York Times, Newsweek, The Chicago Tribune, Down East, and many other publications. Wright worked as a newspaper reporter for 10 years before earning her MFA in nonfiction writing at Columbia University. She teaches English at DePauw University and in the MFA program at Butler University. At her website, liliwright.com, you can read more about her debut novel and check out her collection of Mexican masks.