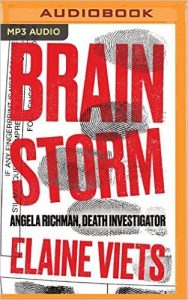 After a brutal investigation, Death Investigator Angela Richman goes to the ER with stroke symptoms. The powerful, respected doctor on call sends her home, where Angela has six strokes, then emergency brain surgery and is in a coma. She’s saved by a brain surgeon, a brilliant outsider who is the bitter enemy of the ER doc. The ER doc is murdered and the brain surgeon is arrested. Drug-addled, hallucinating Angela fights to save the man who saved her life. I lived this story.

“Elaine Viets has written the exciting first book in a multi-layered crime novel series. Angela Richman is not only an investigator but a victim in this complex novel of crime, punishment, and medical malfeasance.”
— Charlaine Harris, #1 New York Times bestselling author.

BRAIN STORM is available from Amazon.

“A very powerful and unusual novel. I think you’ve got everything here that a reader loves — a hospital drama and thriller, a strong, central character. Made much more interesting because the central character is a very unreliable narrator.” — Ann Cleeves, international bestselling author of the Vera Stanhope and Shetland series.

“In BRAIN STORM, Elaine Viets takes a dangerous turn down a dark alley but manages it with panache and a touch of humor. Angela Marie Richman is a kick-ass protagonist who is victimized by the thing we all fear most — our own mortality. This is territory Viets knows well, and she does a fine job of showing the readers the terrain, all the while entertaining them.” — Reed Farrel Coleman, New York Times bestselling author of Robert B. Parker’s THE DEVIL WINS.