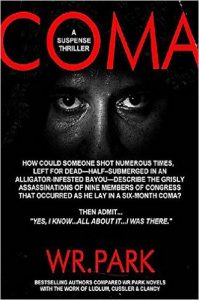 A sadistic assassin, dismembered Congressmen, and a devious plot to overthrow the president send CIA agent Hunter Dougllas halfway around the world on a seek-and-destroy mission. Add the distraction of two beautiful women and a bullet painfully lodged in his skull, and his task is formidable.

A man is discovered near death, half-submerged in a black-water ditch along side a lonely Louisiana bayou blacktop. Shot numerous times and obviously left for dead—he has no identification. The small sheriff’s office turns the case over to the rural hospital. The man barely survives, but due to multiple head wounds remained in a deep coma.

Dougllas’ condition is brought to the attention of CIA Director Carter Holloway. During one of Dougllas’ coherent moments—in the DCI’s presence—he manages to describe each detail of the murders and admits he was there. But how could that be? He’s been bedridden in a coma for the past six-months.

During a difficult recovery, Dougllas realizes that for his own sanity, he must escape the small Louisiana hospital and ferret out the real assassin who stole his identity—and stop him from assassinating the President of the United States—thus allowing the mastermind behind the evil events direct access to the presidency.

COMA is available from Amazon.

It was noted by The Midwest Book Review–“COMA would make an explosive movie. Think Bourne, or the Bruce Willis version of The Jackal, then multiply by ten an you’d have an idea what the movie version of COMA would be.”

Author, columnist, lecturer, past president of three advertising agencies, William R. Park, Sr. has served as a consultant to some of America’s largest and most successful companies. As a nationally known and respected advertising executive for forty-two years, he has written thousands of newspaper/print ads and TV/radio scripts.

Winner of national awards in print and television, his popular ‘Ad Pulse’ monthly column appeared in Modern Retailer Magazine in the ’70s and again in Publishers’ Auxiliary in the ’90s. In addition, articles have appeared in Editor & Publisher, The Best of Times, Route 66 Magazine, Atlanta Journal, Kansas City Star, and various daily newspapers.

He has authored 14 published suspense-thrillers. Bestselling authors compared his body of work with the best of Ludlum, and the work of Cussler, Clancy, Hunter, Morrell and Hillerman.