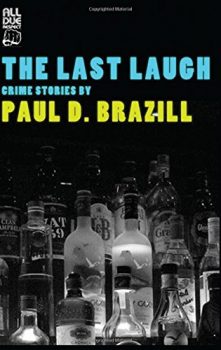 From France, to Spain, to the north east of England, hit men, gangsters, corrupt cops, drunks, punks, and petty thieves all tumble toward the abyss. The stories in The Last Laugh are vivid and violent slices of Brit Grit and international noir, full of gaudy characters and dialogue sharp enough to cut your throat. The Last Laugh is a violent and blackly comic look at life through a shot glass darkly.

THE LAST LAUGH is available from Amazon.

Paul D. Brazill is the author of Guns Of Brixton, Cold London Blues, The Last Laugh and Kill Me Quick! He was born in England and lives in Poland. He is an International Thriller Writers Inc. member whose writing has been translated into Italian, German and Slovene. He has had writing published in various magazines and anthologies, including The Mammoth Books of Best British Crime. He has edited a few anthologies, including the best-selling True Brit Grit – with Luca Veste. His blog is at pauldbrazill.com.

Murder at Morningside by Sandra Bretting