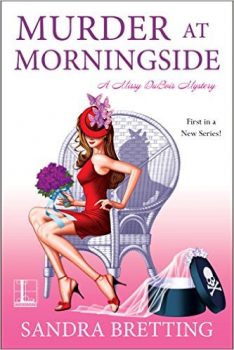 Hired to craft a veil for a socialite getting married at Morningside Plantation means Missy can bask in the height of antebellum atmosphere. But when the bride is found dead in a women’s bathroom, Missy the milliner finds herself entangled in one unfashionable murder. With the list of suspects thicker than the sweltering Louisiana heat, including a gaggle of bridesmaids shedding nary a tear and a family with no shortage of enemies, it seems anyone at the mansion may have done away with the bride-to-be. While Missy has Southern charm to spare, she’s going to need more than manners and a manicure to put a hat pin on this murderous affair . . .

MURDER AT MORNINGSIDE is available from Amazon, Barnes & Noble and Google.

“The unique southern atmosphere further sets this debut novel apart and adds a layer of humor. This is a community where insults are hidden in compliments and the phrase ‘bless her heart’ has a multitude of meanings.” – Kings River Life

Sandra Bretting works as a freelance feature writer under contract at the Houston Chronicle. She received a journalism degree from the University of Missouri School of Journalism and wrote for other publications (including the Los Angeles Times and Orange Coast Magazine) before moving to Texas.

Her Missy DuBois Mysteries series debuts from Kensington/Lyrical Underground in May 2016. Bretting’s previous mysteries include Unholy Lies (2012) and Bless the Dying (2014). Readers can reach her online at www.sandrabretting.com and through Facebook at www.facebook.com/sandra.bretting.