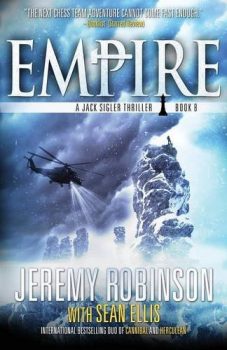 WHEN PAST AND PRESENT COLLIDE…

In 1959, nine hikers of the Dyatlov expedition perish while crossing a remote mountain range in the Soviet Union. More than sixty-five years later, the circumstances surrounding their deaths remains a mystery. In 1995, Julie Sigler is killed in an Air Force training exercise crash, but the circumstances of her death are never called into question…until she appears on TV, twenty years later, standing beside the current President of the United States.

THE WORLD WILL BURN…

Disavowed and on the run, the black ops Chess Team is in search of one of their own: Former President Tom Duncan. Held in a secret U.S. government detainment site after sacrificing his freedom to ensure the team’s, Duncan, callsign: Deep Blue, hasn’t been seen or heard from in a year. Meanwhile, the team’s leader, Jack Sigler, callsign: King, is on the trail of a woman who just might be his sister Julie—back from the dead and working for his enemies. Drawn into a labyrinth of intrigue, King discovers a scheme to topple the U.S. government and forge a new global empire.

AND AN EMPIRE WILL RISE FROM THE ASHES.

To stop a war that could destroy civilization, King and the Chess Team infiltrate the frozen Russian wilderness, battle the elements and inhuman abominations spawned in Cold War laboratories, and go head-to-head with a powerful enemy, ascending from the pages of history. Torn between loyalty to his family, his teammates and his country, King faces his most daunting challenge yet. The stakes have never been higher, or more personal.

Jeremy Robinson and Sean Ellis, the international bestselling duo behind Herculean and Cannibal are back for the eighth novel in the pulse-pounding Jack Sigler Thriller series. With the ancient mystery of James Rollins and frenetic pacing of Matthew Reilly, and with an all too plausible civilization-ending scenario, Empire will please new readers and longtime Sigler fans alike.

EMPIRE is available from Amazon and Barnes & Noble.

“Robinson writes compelling thrillers, made all the more entertaining by the way he incorporates aspects of pop culture into the action.”
—Booklist

“What follows in Savage is much more than a political thriller. Robinson and Ellis have combined technology, archeology, and even a little microbiology with the question they ask better than any other authors today: what if?”
—Suspense Magazine

His series of Jack Sigler / Chess Team thrillers, starting with Pulse, is in development as a film series, helmed by Jabbar Raisani, who earned an Emmy Award for his design work on HBO’s Game of Thrones. Robinson’s original kaiju character, Nemesis, is also being adapted into a comic book through publisher Famous Monsters of Filmland, with artwork and covers by renowned Godzilla artists Matt Frank and Bob Eggleton.

Sean Ellis has authored and co-authored more than twenty action-adventure novels, including the Nick Kismet adventures, the Jack Sigler/Chess Team series with Jeremy Robinson, and the Jade Ihara adventures with David Wood. He served with the Army National Guard in Afghanistan, and has a Bachelor of Science degree in Natural Resources Policy from Oregon State University. Sean is also a member of the International Thriller Writers organization. He currently resides in Arizona, where he divides his time between writing, adventure sports, and trying to figure out how to save the world.

Visit him on the web at: seanellisthrillers.webs.com.