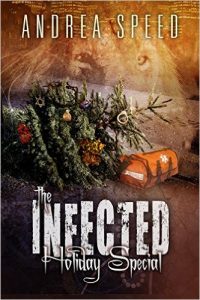 Peek behind the curtain with Roan McKichan and the various characters who make up the Infected universe in this sometimes serious, sometimes humorous collection of short stories centered around the holidays.

There’s Kevin, who reflects on how lonely his life in the closet is. And Fiona and Tank, who go on a surprisingly good first date. Roan himself finds his Halloween celebration at Panic interrupted by loose cats and obnoxious frat boys while Paris contemplates his mortality on their impromptu honeymoon. Dropkick deals with her new marriage and male egos on the job, Roan meets Connor at the scene of a drunken fight, and Holden contemplates his future as a street kid. These stories and many more will be told, centered around more holidays than you can shake a dreidel at.

THE INFECTED HOLIDAY SPECIAL is available from Amazon and DSP Publications.

Andrea Speed was born looking for trouble in some hot month without an R in it. While succeeding in finding Trouble, she has also been found by its twin brother, Clean Up, and is now on the run, wanted for the murder of a mop and a really cute, innocent bucket that was only one day away from retirement. (I was framed, I tell you – framed!)

In her spare time, she arms lemurs in preparation for the upcoming war against the Mole Men.
Viva la revolution!