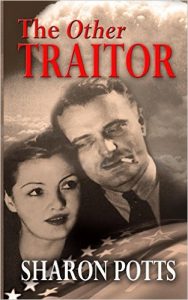 It’s been over sixty years, but three people remain haunted by what he did.
Was it treason…or something far worse?

Raised with shame and silence, Annette Revoir refuses to confront her terrible legacy—her grandfather’s execution as an atomic bomb spy in the 1950s. But when she finds an old family photo album that reveals a very different portrait of her grandfather, her instincts as a journalist take over. Her inquiries put her on a collision course with a young man and his grandmother, but Annette is prepared to go to any lengths to prove her disgraced grandfather’s innocence.

“This is thriller writing the way it is supposed to be.”
—Michael Connelly, New York Times bestselling author, on In Their Blood

THE OTHER TRAITOR is available from Amazon.

Praise for the novels of Sharon Potts:
“Resourceful and emotionally strong characters boost this satisfying domestic thriller from Potts.”
—Publishers Weekly, on Someone Must Die

“A complex plot that builds believable suspense on every page.”
—Sacramento Bee on In Their Blood

Sharon Potts is the award-winning, critically acclaimed author of five psychological thrillers, including In Their Blood—winner of the Benjamin Franklin Award and recipient of a starred review in Publishers Weekly. A former CPA, corporate executive, and entrepreneur, Sharon has served as treasurer of the national board of Mystery Writers of America, as well as president of that organization’s Florida chapter. She has also co-chaired SleuthFest, a national writers’ conference. Sharon lives in Miami Beach with her husband and a spirited Australian shepherd named Gidget.