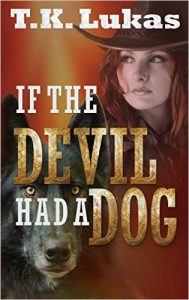 Sidney McQueen flees the most evil man she’s ever known – her husband. Can Markus Yeager, former Marine turned CIA operative, convince her to accept his help when he’s grappling with his own personal demons? IF THE DEVIL HAD A DOG – an edgy, psychological thriller that keeps you riveted.

“This novel will thrash you about on an emotional rollercoaster ride. Some of the narrative is so chillingly authentic that you may stop for a moment and wonder how much of what you are reading is fiction.”
Gary B. Haley – Author of The Attunement and The Scrapbook Lecture

On her third failed marriage, thirty-four-year-old Sidney McQueen regrets that her Ph.D. in Psychology wasn’t useful in choosing husbands. She feels better suited choosing horses. When her divorce attorney advises her to disappear for a while, she heeds the warning. But can she disappear without a trace when her soon-to-be ex-husband, a powerful attorney with ties to Mexican drug cartels, is hell-bent to find her? He wants back what belongs to him – and it’s not just Sidney he’s after.

Markus Yeager, former Marine turned CIA operative, has a top-secret past. Bearing physical and emotional scars from a time he’d like to forget, he has every reason to be suspicious when Sidney pulls into town, horse trailer in tow. Her life-or-death situation draws him back into a world he thought he’d left behind, a world of weapons, drugs, money, and dangerous traffickers who’d put a bullet in your head while they mouthed their Hail Marys.

Thrown together by circumstance, drawn closer by mutual need, Sidney and Markus uncover a web of treachery and unspeakable violence. In their quest to expose the cartel and bring a murderer to justice, chasing the truth becomes a frantic race against a deadly predator.

IF THE DEVIL HAD A DOG is available from Amazon.

“Wow! T.K. Lukas’ intriguing characters pull you in and the story keeps you turning the pages.”
Suzanne Ferrell – USA Today Best-selling author of Mischief Under the Mistletoe

The new suspense/thriller by T.K. Lukas, If the Devil Had a Dog, will touch a lot of people in many ways. Far too many of them, from the most feminine to the hardest of veterans, will be able to closely relate to the distress and anxiety detailed in Lukas’s new novel. Some of the chilling-but-thrilling scenes may leave you wondering how much of what you’re reading is fiction, and how much of it is a shared, terrifying moment in history. However, as if to help you recover from the moment, the next few words might make you laugh out loud, or stop for a bit to consider a thought-provoking idea. If the Devil Had a Dog: full of surprises and highly recommended.
Gary B. Haley – Author of The Attunement and The Scrapbook Lecture

“IF THE DEVIL HAD A DOG is a layered, complex thriller that takes you in unexpected directions. The book is not for the weak hearted as there is some hardcore violence and scary stuff, but the heart of the story is about who you are when the going gets tough.” SusanMax – AmazonReview

T.K. Lukas, a native Texan and award-winning author, writes both contemporary and historical fiction. Her debut novel, Orphan Moon, is a historical fiction based in 1860’s Texas and other western frontier locations. The book, published in 13 countries, found its way onto numerous Amazon Kindle bestseller lists. Additionally, Orphan Moon is a Writers’ League of Texas 2015 Top Five Finalist for Historical Fiction and the recipient of the Readers’ Favorite Five Star Award. It was also picked as a finalist in the Adult Fiction category in The Wishing Shelf Independent Book Awards – 2015. Look for the release of books two and three of the Orphan Moon Trilogy in 2016.

T.K.’s second novel, If The Devil Had A Dog, is a contemporary suspense thriller/contemporary romance with a strong female lead and a former Marine turned CIA operative as the lead male character. This novel is also published in numerous countries and was on the Amazon Kindle bestseller list in both the US and Germany in action/adventure and suspense.

The lead male character in If The Devil Had A Dog is a U.S. Marine Officer turned CIA operative. While researching this fictional hero, an interview with a real-life retired Marine turned CIA contractor with more than nine years of almost constant combat duty since 9/11, led to a request by him for T.K. to write his biography. Look for this extraordinary story of a true American hero mid-year 2016.