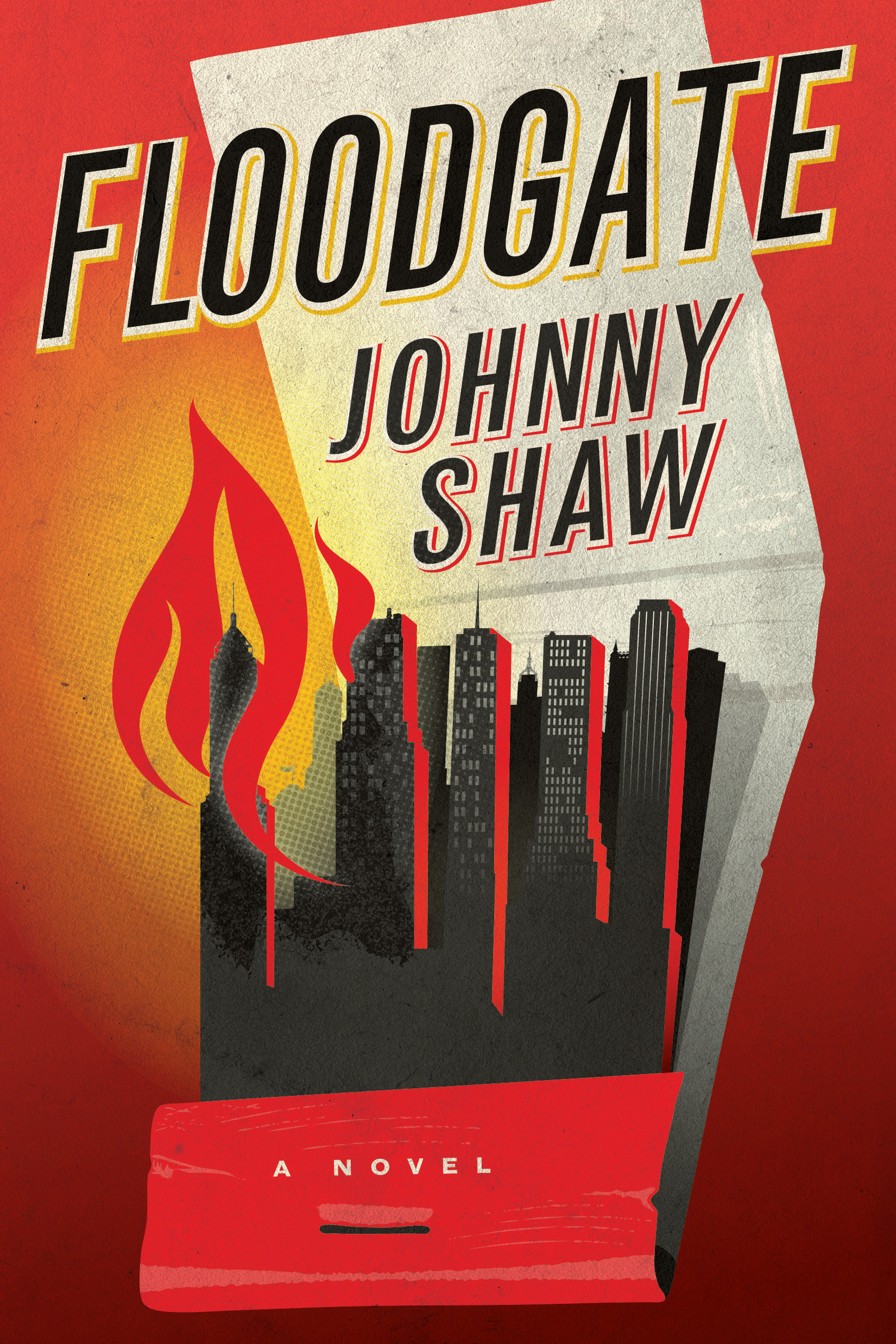 Rather than ask each other the same questions via email, authors Marcus Sakey and Johnny Shaw decided to have a conversation on the phone with no set plan. No prepared questions. They just let the conversation go in whatever direction it headed and made notes as they went.

The following is a sampling of a conversation that was mostly laughing. Attribution didn’t seem necessary as neither author was great at keeping notes or really wanted to take credit for what they said.

“The thing is, I’m not really talented. I’m not a good writer. Honestly, my first draft reads like an illiterate ogre just started typing with their thumbs.”

“Oh. Oh, man. Yeah. But with that draft I get the shape of the thing. Which is what I need to fix it. Then I just do a ton more drafts.”

“You hear some writers talking about how the characters come to life for them, start talking. Which, my feeling is that if your characters are talking to you, it’s time to adjust your dosage.”

“You hear a lot about killing your darlings, and sometimes you should. But not just because you love them. It’s best that they be, you know, murder-worthy.”

“As human beings, we don’t have to enjoy our jobs 100 percent. That’s not a right. But if you have some control, and you can make it more fun, well, why wouldn’t you?”

ON WRITING A SERIES

“I admire people who can write a series. I’m just not one of them.”

“Well, yeah. But it was really one story in three books. I just figured no one would buy it if it were 1500 pages long.”

“I think this will be the last book in my series.”

“I’m not sure what more can happen to them. They’re not cops or PIs, they’re just kinda shit magnets.”

“Series can be great. But then you see the examples where they’re just going and going, and they have to get sillier to keep it going.”

“Like they’re building a house and just keep adding rooms to it.”

“Or they jump the shark, and suddenly the medical drama has the hospital being seized by terrorists.”

“And you know they’re just goofing on it now. Like, you know that’s one writer just trying to get fired.”

“I don’t. I can’t. I have first readers, but less and less so. I’m a control freak. I turn in a tight draft. What I want to turn in is a draft that, if no one tells me I’m an idiot, is what I want to publish right now, no one touching it.”

“I go the other way. Talking story is one of my greatest joys. And I find the whole thing easier working with someone. When I’m deep in a book, it’s not the forest-for-the-trees problem–I’m much closer than that. I’m staring at the bark. So working with someone who has a forest of their own is enormously helpful.”

“It’s a writer’s room, but instead of working on the same show, we’re working on two different shows. We know the characters, the structure, but we get to work on our own show when the conversation is done.”

ON EDITORS AND EARLY READERS

“It’s challenging enough to make a book that makes sense. So my approach to early readers is, ‘I don’t want any feedback, I don’t want any notes. I just want you to tell me if this is a book.’”

“What I never want is suggestions. I want readers and editors to point out problems, to tell me where something didn’t work, or where they got bored. But I don’t want them coming up with a notion of how to fix it, because they’re probably wrong.”

ON WRITING FOR FILM AND TV

“A nice thing with books is that the marketing exists to help sell the thing we all believe in–including the people doing the marketing. It’s so much better than movies, where marketing is pulling the train. I mean, nobody had the artistic vision of making Transformers 2.”

“If you ever read a screenplay, you’ll know they’re very poorly written. At the sentence-level.”

“That’s one thing I miss about screenwriting. Even if the person you’re talking to is an idiot, at least you get to talk story.”

“One great thing with writing comedy in a writer’s room is that even though everyone’s trying to out-funny each other, it doesn’t matter. Whether your stuff is better or theirs is, everyone’s funny, so you automatically win.”

“When I started in screenwriting, I was young enough to think I could write anything. Throw it at me. I’m game.”

“Pretty much the same.”

“The worst thing that can happen when you write comedy is you fall in a love with a joke. And then you try to write the whole fucking thing around it to have this one fart joke that you’re in love with.”

“Comedy is about being in touch with your sense of humor to the degree that you can write the things you think are funny.”

“If I took what I think is the funniest moment in my book and said, this is it, you’d say, I didn’t even realize that was a joke.”

“Density is key for me. If one joke falls flat, there’s another right around the corner. Think Mel Brooks, the Marx Brothers, Airplane…Do you cook?”

“Okay. So for me, writing funny is like building a sauce. Made out of dick jokes.”

ON CRAFT, AND LESSONS LEARNED

“It’s interesting the advice we all give to aspiring writers, and how different it is from what we actually do.”

“Sure, because they’re just starting out–”

“Right. So you say, listen, under no circumstances should you ride your motorcycle over a bunch of parked cars. Even as you’re climbing on your bike.”

“In my life, the worst role model by far is Evel Knievel. We all built ramps and tried to jump over canals. It ended the way you’d expect.”

“Fun is an important part of what I’m trying to do. And fun isn’t frivolous. It’s valuable. When I have to cut something fun, man, that’s a bummer.”

“When an idea grabs you enough, when it’s haunting you and you’re getting scraps of scenes when you’re buying groceries, write the book. Whether or not it looks like a good plan.”

“People talk about readers like they’re delicate flowers that need to be protected. Screw that. We don’t read to feel safe. We read so we don’t feel safe.”

“I’m a journey-not-a-destination kinda guy. I mean, the finished book is great, it makes me happy to have it done, but writing is what I do all day. I want to enjoy that part. And I want to make every journey different.”

“I’m trying to go back to the writing I did when I wasn’t thinking of it as a career.”

“Yeah. One of the best, and most often given, and hardest to grasp bits of writing advice is, ‘Write what you’d like to read.’ It’s harder than it sounds.”

“Like, there’s an empty spot on the bookshelf. There’s a book that doesn’t exist that needs to.”

“I’m always panicking about the book I’m writing. But I usually know I can fix it. (beat) Just more jokes.”

“It’s all about presentation to me. If it’s a science thriller, yeah, get your facts right. If you’re writing about a  couple of fucknuts wandering the terrain, you don’t need to rely on a ton of realism.”

“Once you’ve written a scene in the Situation Room, it’s harder to care about the worst day in a normal person’s life. For me, anyway.”

“Lesson Number One in Author School: Don’t turn in a book in eight different fonts. (beat) Although, in my defense, there was a reason. Even if it was a stupid reason.” 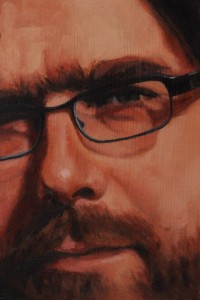 Johnny Shaw was born and raised on the Calexico/Mexicali border, the setting for his novels DOVE SEASON, BIG MARIA, and the upcoming PLASTER CITY. He has won both the Spotted Owl Award and the Anthony Award. His shorter work has appeared in Plots With Guns, Thuglit, Shotgun Honey, Crime Factory, and numerous anthologies. Johnny also acts as the editor-in-chief and is a frequent contributor for the online fiction quarterly BLOOD & TACOS, a loving homage to the men’s adventure paperbacks of the 1970s & 1980s.

Johnny received his MFA in Screenwriting from UCLA and over the course of his writing career has seen his screenplays optioned, sold and produced. As a playwright, his stage collaborations with actor Jaime Arze, NATURAL ACTS and A GOOD KIND OF CRAZY, have been performed throughout Los Angeles.

For the last dozen years, Johnny has taught screenwriting. He has lectured at both Santa Barbara City College and UC Santa Barbara. He is the owner of Johnny’s Used Books, formerly a brick-and-mortar bookstore in Los Angeles, now entirely online. Johnny lives in Portland, Oregon with his wife, artist Roxanne Patruznick.

To learn more about Johnny, please visit his website.

Marcus Sakey’s thrillers have been nominated for more than fifteen awards, named New York Times Editor’s Picks, and selected among Esquire’s Top 5 Books of The Year. His novel GOOD PEOPLE was made into a movie starring James Franco and Kate Hudson, and BRILLIANCE is currently in development with Legendary Pictures. His most recent novel is WRITTEN IN FIRE, third in the Brilliance trilogy.