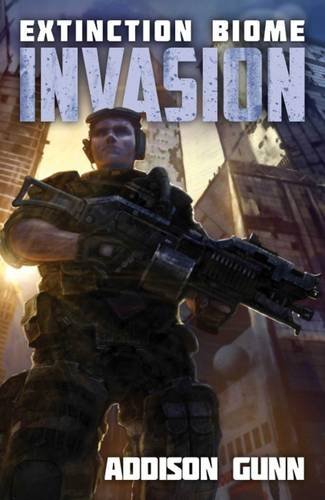 Gunn is the shared pen name of Anne Tibbets and Malcolm Cross, the co-authors of a thrilling new science fiction series featuring jaded military recruit Alexander Miller. In EXTINCTION BIOME: INVASION, Miller and his men are pulled into service to stop a deadly parasite that is infecting humans, and threatening to destroy the Earth, one eco-system at a time.

EXTINCTION BIOME: INVASION is bloody (really bloody!), action-packed, and science fiction at its finest—everything I’ve never loved in a novel. Until now. This month, Anne Tibbets talks to The Big Thrill about writing for a tyrant to co-write a thrilling military sci-fi that grabs you from the first page and doesn’t let go until the very bloody end.

I really enjoyed EXTINCTION BIOME—but wow! I can’t even imagine all of the research that went into this book. What safeguards have you put in place to insure the government isn’t tracking you?

I’m fairly certain the governments of the world have Malcolm and I on some sort of watch list someplace, given the extensive and troubling research that was involved in preparing and writing EXTINCTION BIOME.

I am a huge fan of military sci-fi, but I’m no expert and have no personal experience in battle, so I tried to research every detail—from the parts of the weapons, to the number of rounds it carried, to battle strategy, technology and the advancements happening in that field, as well as coming advancements in medical research, touching on parasites, insects, and cult psychology. Given all those Google searches, and all the reading material delivered to my house, I don’t blame the government for keeping a close watch on me. The good news is, I have nothing to hide. So although I should probably be more paranoid, like “Addison”—I mean, Addison is completely off the grid—I’m assuming once the book is released the government will realize I had a theoretical curiosity and not a practical one.

By far the grossest part of the research was the discovery of orange oil as an insect repellent, and the medical research I did on the application of said oil to the brain. That scene made me physically gag when I wrote it. I’m not going to apologize however—looking back now, it might be my favorite.

It was quite an impressive scene! Military Sci-Fi isn’t on my knee-jerk TBR list, though admittedly, you may have swayed me with this book—how much pressure is on you to “get the facts right?”

I felt immense pressure to get the facts right. I didn’t want to let down loyal readers of that genre by not having enough action, or not having enough hardcore scientific theory and facts. I feel the balance Malcolm and I created between those elements was a thing of beauty, and I hope the readers agree.

What’s the key in making a military sci-fi thriller accessible to someone like me—someone who doesn’t really know if the facts are indeed right, but needs to believe they are to stay engaged?

I think one of the best solutions for those who don’t regularly read the genre is to be sure to hit the science, but not turn the book into a lecture. Ultimately, you could have cutting-edge tech and scientific information laced throughout the whole book, but if the plot is weak, if the characters aren’t compelling, then who cares?

Is there a weapon from the book you’d like to try out in real life, like at a gun range or something?

I’ve shot handguns and machineguns before, so I feel like I’ve scratched that itch. What I would really love to try is an Ekso Bionic suit. It’s this metal exo-skeleton that reinforces a person’s limbs and torso, adding strength and durability. Of course, we took that tech and expounded on it by turning it into a weapon with pincher claws for hands, automatic machineguns with attached rocket launchers, and made them fully enclosed like a battle armor suit. However, the technology doesn’t exist yet, so I guess I’ll have to wait on trying that out.

Addison Gunn sounds like quite the militant boss—elusive, but strict! What was it like being his writing slave? Is he impressed with the final product?

Addison may bark a bit, but he’s a fair boss. You need a thick skin and the ability to argue—which lucky for Malcolm and I, wasn’t a problem. When all was finished I asked Addison how he felt about it and he said, “I’m damned proud of the job you kids’ve done, writin’ and editin’ and puttin’ pretty pictures on the front and all that. If just one man or woman out there’s prepared for when the real deal comes after readin’ this book, then we’ll have done a day’s work and then some.” Coming from Addison, that was huge to me.

There’s a lot of blood in this book—bloodbaths aplenty! And the descriptions of every bloody scene are so visual! What’s the allure of “darker” fiction?

I have always been fascinated with the inner workings of the human existence. There are so many people moving through life: working, having families, paying the bills, mowing the lawn, walking the dog—and yes, there are some who glean deep satisfaction from that kind of life, but there are some who don’t. There are some who live that life and are bored, angry, resentful. They may think horrible thoughts in their minds about their wasted life but don’t express them aloud. I think the allure of “darker” fiction is a healthy way for those frustrated humans to exercise that part of their psyche without hurting anyone. They can be in battle, but not kill anyone. They can fight a zombie apocalypse, and not worry about their safety. It’s ultimate escapism. Now, given the description I just gave, one might guess that I am one of those types of frustrated humans and that’s why I love writing post-apocalyptic and military science fiction—or one could think that I just have an overactive and pessimistic imagination. Either way, I can’t seem to write anything else. So, take from that what you will.

I know you’ve done some writing for TV. How does writing scripts help with the visual aspect of novel writing? And challenges?

Having learned storytelling first with scriptwriting, I tend to see or hear a scene first, write it down a piece at a time, then go back and fill in the layers. I’m not sure if this is the “right” way to construct a novel, but it seems to be working for me so I try not to mess with it.

Alexander Miller is an impressive character. Did you like him when you first met, or was he more of an acquired taste? What can we expect from him—and you—next?

You get the sense of who Miller is from the very first scene. I liked him right away. All this action, all this death—Miller doesn’t stop until the job is done, then BOOM—he reacts. The great thing about him is that he has a soul. Everything he’s done comes back to bite him—it just takes a bit of time for him to process it, and then it shows up in very real ways. He may not talk about his emotions, he may not think beyond the battle when it’s happening, but he pays the mental price afterward and I think that’s why he’s such a great character.

As the EXTINCTION BIOME series progresses (there are three currently slated; Book Two: Dispersal is set to publish in Fall 2017), Miller has no choice but to evolve with the changing Earth. As things worsen and shift he has to adjust his tactics and his mind-set or risk becoming extinct, too. He’s the perfect manifestation of the series’ theme, which is just that: evolve or die.

Addison Gunn is the accumulative pen name of authors Malcolm Cross and Anne Tibbets. Anne is a Contributing Editor to THE BIG THRILL.