Tracking a Killer and Facing Down the Past 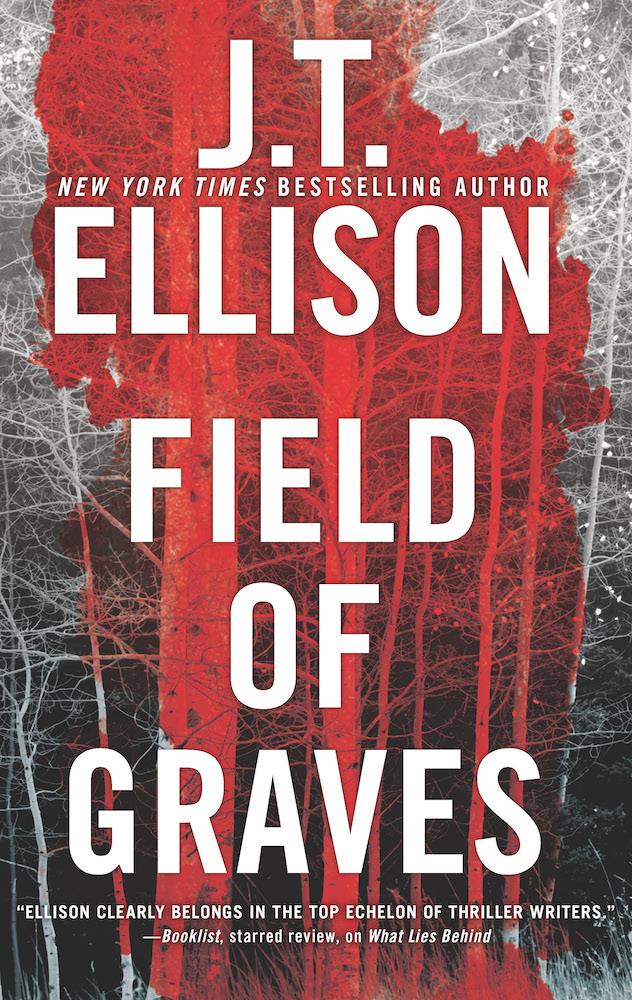 Even as a series pushes forward, there’s always an opportunity to go back to the beginning. Author J.T. Ellison manages to do both in her latest Lieutenant Taylor Jackson thriller, the menacing and intense FIELD OF GRAVES. With a serial killer on the loose in Nashville, readers are left to ride along with cops that seem just as damaged as the madman trying to speed up a nightmarish future. Jackson and some of Ellison’s most memorable characters join forces to not only defeat the killer—but to fight back their own haunted pasts. Ellison, a New York Times-bestselling author, keeps you on edge with stellar pacing and lively characters. Coupled with some surprising peeks into the history of some of her key characters and fans will not want to skip on the dark, haunting GRAVES. We had the pleasure of talking about the book and what’s next for the prolific Ellison.

I read a lot of Tom Clancy back in the day, but the first thriller I remember getting really excited about was Nelson DeMille’s The Charm School. I loved the idea of the wolf in sheep’s clothing, a theme I explore over and over in my own work. Also, because of the imminent Russian threat to the U.S. (I actually took a class on global thermo-nuclear war my freshman year of college), I decided I wanted to join the Foreign Service and do my part to end the threat from abroad. I was on that path when I met my husband (who was, oddly, a CIA recruit at the time). Neither of us took it any further, though. So a life-changing read, indeed.

Definitely. What can you tell us about your writing process?

Schizophrenic, at the moment. Because of terrible scheduling on my end, I have my hand in several projects right now. I’ve given up on any sort of steady progress on anything and instead have been putting out fires, snatching whatever writing time I can. But when things are calm and normal, I keep shop hours. I do business in the morning and write in the afternoon. I am not a morning person, so this works well for my creative flow, which doesn’t hit its peak until 4 or 5 in the afternoon. When I open the manuscript, I reread what I wrote the previous day, edit it, fix any lingering issues, decide which scene I need to get out of my head, and go from there. I shoot for the whole scene, which generally is a chapter, or 1000 words, give or take. I research while I write, for the most part. I am a terrible taskmaster. If I stay on myself, I can write two books a year comfortably, three if I push it. I’m pushing it right now.

Tell me about FIELD OF GRAVES—what was the inspiration behind it and why did you find you needed to tell this story now?

The inspiration—I wanted to write crime fiction like John Sandford (here we are again, being influenced by another life-changing thriller.) I wanted a female homicide lieutenant who was half cop, half rock star, and Nashville had to be very integral to the story. So I wrote a novella, which was awful, then wrote Field of Graves, which wasn’t horrible. It was my very first full-length novel. (And yes, this all happened a decade ago. Which is wild.)

Field of Graves landed me my agent but didn’t sell, so I put it in a drawer, jokingly called it “my 80,000 words of backstory,” and wrote the next book in the series, All The Pretty Girls, which was my official debut. Field of Graves introduces Nashville homicide lieutenant Taylor Jackson, and the case of the University Killer results in Dr. John Baldwin, FBI profiler, joining the team. It’s the origin story for Taylor and Baldwin, and for Samantha—a prequel to both their series.

When I decided to publish it, I did a complete rewrite from top to bottom. Because it hadn’t sold, I had convinced myself it was terrible—so terrible, in fact, that I asked three beta readers to tell me if it stood a chance of working after a revision. They loved it and couldn’t figure out why it hadn’t been published. When I read it, I realized it wasn’t horrible. It needed work, a polish, but it was a solid tale. It’s amazing what rejection can do to an author’s psyche. All these years I felt like I wasn’t good enough, and it affected me greatly.

Why is Nashville a great setting for a crime novel? How key is setting to this kind of story?

In crime fiction, I think any time you step away from a major metropolitan area, your setting has to be a character. Nashville is a misunderstood town. The world knows it as the home of country music, yet it’s a much more complex, dynamic city than it first appears. We have the old South rubbing elbows with newfound fame and fortune. We have a serious dichotomy between the upper and lower classes, and a lot of crime. We have problems with gangs, with drugs, with the usual junk any city has to deal with. Add in that the city is fabulously beautiful, the food is to die for, and there’s a cosmopolitan air that many never hear or see, and you have a huge canvas to draw from.

I love writing about Nashville. This town has been very good to me.

What is it about Taylor Jackson that you find compelling to write?

She can be difficult to write, actually, because she’s so black and white. She’s an iconic hero, and there’s not a lot of change that happens to her over the course of a novel. Rookie mistake—limited narrative arc. She’s very single-minded: There’s good, there’s evil, and there’s nothing in between. She knows where she falls, and where everyone else should fall, too. She is insulted by the idea of crime, in many ways.

Having a character with a strict moral compass is a lot of fun. I love to put her in situations that have shades of gray and make her deal with them. And she loves her town. She loves being Nashville’s protector. I’ve always seen her as Athena, the warrior-goddess of Nashville.

How important is it to have a strong supporting cast for your lead?

Very. I love my cast of characters, they’re family. I was so happy to come back to them, to see them fresh and new, unchanged by what eventually happens to each of them as the series progresses. I think that’s the beauty of having a prequel that was already written: I didn’t have to try and rewind the characters to imagine who they were before. They were untouched. Story-wise, there were some organic problems, so I had to make changes to allow for things to set up properly in the subsequent novels. Samantha Owens, Taylor’s best friend, is vital to the stories, and Taylor’s team is newly assembled when this book opens. They’re finding their way through the case together. And that’s the thing about an ensemble cast—they’re dependent on each other to make it all flow.

You’ve written a number of bestsellers and received notable acclaim—what keeps you motivated and challenged?

Fear. No, I’m serious. One of the beautiful things about this book—I wrote it in a vacuum. I didn’t have deadlines, I didn’t have deals, I certainly didn’t have readers. There was no expectation, no pressure. Nowadays, that isn’t the case (though 90 percent of the pressure I’m under is self-inflicted). I just want to keep swinging for the fences and hope people love my books as much as I love writing them. It’s funny, though, the deeper you get into a career, the harder it gets to stay detached from the work. Maybe it’s just me, but there’s something very humbling and terrifying about people actually reading the books and wanting more of them.

I am writing the next Samantha Owens novel—it’s actually a Taylor Jackson book, too. All Fall Down sees the two working together to take down a serial killer targeting Sam, and a bigger threat is looming for them both. It’s the continuation of the story I started in What Lies Behind; the two are a duology. I ended on a rather large cliffhanger that needs to be resolved, STAT.

Which authors inspire you?

I am constantly amazed by how many incredibly talented authors there are out there. I mean, seriously, walk into any bookstore and run your fingers along the shelves, and there they are, the heroes of the literary world. I admire so many authors it would take years to list them all, but I’m truly inspired by those who are consistently creating excellent work year after year, and their craft gets better and better. Writers like Jeff Abbott, Harlan Coben, John Connolly, Lisa Gardner, Laura Benedict, Ariel Lawhon, Victoria Schwab, Meg Gardiner—they keep me up at night, both reading late and wondering how to get that good. We’re blessed, truly, by the number of incredible authors in our ranks.

Is there anything you’re reading or watching these days that’s particularly caught your attention that you’d like to plug?

I need great storytelling to refill my well, so I’m a big fan of excellent scripted episodic television. Game of Thrones and Outlander are high on my list, of course, but my husband and I just binged on The Magicians, based on Lev Grossman’s books. Think adult-themed Harry Potter. Outside of Quentin Coldwater’s character (who I think Jason Ralph has played to sheer perfection), the story is loosely based on the books, but they’ve done a magnificent job. The acting is wonderful, perfectly over-the-top, and the dialogue crisp and funny. I’m sorry it’s over for the season.

Great to be with you, Alex. Thanks for this, and good luck with your excellent books!

Thank you! This was a pleasure. 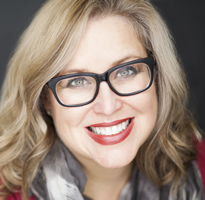 J.T. Ellison is the New York Times bestselling and award-winning author of fifteen critically acclaimed thrillers and is the co-author of the Nicholas Drummond series with #1 New York Times bestselling author Catherine Coulter. With over a million books in print, Ellison’s work has been published in twenty-five countries and thirteen languages. She is also the co-host of A Word on Words, Nashville’s premier literary TV series, which airs on Nashville Public Television. J.T. is also the founder of Two Tales Press, an independent publishing house, and The Wine Vixen, a wine review website. She lives with her husband and twin kittens in Nashville.