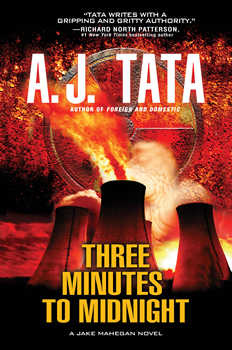 The novels of Brigadier General A. J. Tata don’t go unnoticed, that’s for sure. Even former President George W. Bush is a fan. Tata’s well-researched, authentic, and engaging novels are built to keep readers on edge from the first page on, and his latest, THREE MINUTES TO MIDNIGHT, is no exception.

The second of Tata’s novels featuring Jake Mahegan, THREE MINUTES TO MIDNIGHT finds the Delta Force vet on the trail of his mother’s murderer. But when an Army geologist is kidnapped, Mahegan must figure out if the two threads are tangled together. When nuclear plants on U.S. soil fall under attack, that question is answered with deadly results. As time winds down, Mahegan must track down the homegrown terrorists hell-bent on tearing the country apart from within before it’s too late. It’s a safe bet this isn’t a low key, slow-moving piece of fiction. Quite the opposite. Tata brings his sharp plotting and first-hand knowledge together to craft a taut, memorable story. We got the chance to talk with Tata about his latest and what’s next for him.

This is your second Jake Mahegan thriller—what makes Jake such a fun character to write? What experience has he gained since the first novel?

Jake’s constant battle internally is that he is trying to escape the warrior life and find love, yet he is continuously thrust back into the fray. Since Foreign and Domestic, Jake has had his dishonorable discharge converted to an honorable one and he has resigned himself to working with the man who made that happen, Major General Bob Savage. Still, hope reigns eternal and he meets Grace Kagami in THREE MINUTES TO MIDNIGHT, hoping that he can trust her to help  him.

Your book deals with some very topical things, like domestic terrorism. How much research is involved and how much do you draw from your own professional experience?

I research all of my books extensively. While I have significant experience combatting terrorism, I remain current through frequent news program appearances and studying the enemies of our nation and discerning their intent.

While researching Mortal Threat in Tanzania we were camping in the middle of the Serengeti at night when four lions chasing a wildebeest ran within a few meters of our tents. One lion stopped and walked around the tent my daughter was in then rejoined the chase. Needless to say I thought I was being heroic wearing my gym shorts and brandishing my small Swiss army knife as I came to her rescue. She laughed and said, “Dad what good is that against a lion?”

Once the research part is done, what’s your writing process like?

I write daily, attempting to create 1k-5k words, depending on how creative I’m feeling. Within 3 months I have a draft and send it to a few readers who assist me and give me honest feedback. Then I take that feedback and complete the manuscript.

Are there authors you are inspired by, or that inspired you to become an author yourself?

Stephen King was an early inspiration for me when I was a child. Other authors that I enjoy include Brad Thor, Lee Child, James Patterson, CJ Box, and John Sanford, among many others.

How did your life as a Brigadier General inform your fiction work, and did you find it hard to relive some of your own experiences as you sought to translate those moments into your written work?

My books are pure fiction and while my experience undergirds my writing, my goal is to entertain and create an enjoyable experience for the reader.

The book it tightly-plotted and feels propelled from page one—how do you strive to keep your work fast-paced but also character-driven?

For me, the characters are the story. The predicaments I put them in drive the action. On each page I am trying to minimize my protagonist’s chances of success while maximizing the opportunity for the antagonist, creating tension and conflict at every turn.

What’s next for Jake Mahegan?

Jake Mahegan #3 is titled Besieged and takes place in Wilmington, North Carolina where Cuban and Iranian business and military elements use an autonomous car manufacturing plant as a method to deliver unthinkable terrorist strikes around the nation. 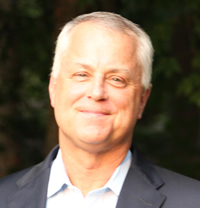 Brigadier General Anthony J. Tata, U.S. Army (Retired), commanded combat units in the 82nd and 101st Airborne Divisions and the 10th Mountain Division. His last combat tour was in Afghanistan in 2007 where he earned the Combat Action Badge and Bronze Star Medal. He is the author of the critically acclaimed novels, Foreign & Domestic and Sudden Threat. He has been a frequent foreign policy guest commentator on Fox News, CNN, and CBS News. NBC’s Today Show featured General Tata’s career transition from the army to education leadership where he has served as the Chief Operations Officer of Washington, DC Public Schools for firebrand Chancellor Michelle Rhee and as the Superintendent of the 16th largest school district in the nation in Wake County/Raleigh, NC.