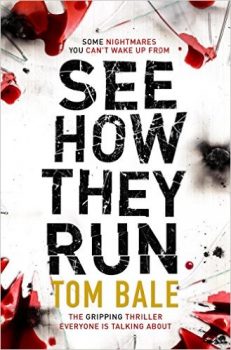 In the dead of night, new parents Alice and Harry French are plunged into their worst nightmare when they wake to find masked men in their bedroom. Men ruthless enough to threaten their baby daughter, Evie.

This is no burglary gone wrong.
The intruders know who they’re looking for – a man called Edward Renshaw.
And they are prepared to kill to get to him.

When the men leave empty handed, little do Alice and Harry realise that their nightmare is just beginning. Is it a case of mistaken identity? Who is Renshaw? And what is he hiding?

One thing is clear – they already know too much.

As Alice and Harry are separated in the run for their lives, there is no time for breathe in their fight to be reunited. And with their attackers closing in, there is only a choice:

Terrifying, unputdownable and full of twists and turns, this stunning thriller will have you on the edge of your seat right to the very last page.

SEE HOW THEY RUN is available from Amazon, Amazon CA and Amazon UK.

‘Fast paced, shocking turns and thrilling scenes which make the reader focus purely on the characters’ plight within the pages.See How They Run is a fantastically thrilling whirlwind of a book. It is a tense, masterful lesson in putting ordinary characters into extraordinary circumstances and watching the story unfold. A highly entertaining 5 star read for me!‘’ ‘Bibliophile Book Club‘

‘ Heart-poundingly brilliant, the tension was palpable. I could almost hear the adrenaline coursing through my veins. The action is non stop … I could hardly catch my breath.‘ Sincerely Book Angels

‘See How They Run is a perfect thriller with moments that make you hold your breath and hope that everything will be OK. A fantastic novel that will make you double check and then triple check you locked your back door.’ Blabbering About Books

‘Totally intense read, which I couldn’t put down. I actually thought I was going to have a heart attack it got my heart racing that much! ‘Chelle’s Book Reviews

Tom Bale has had a variety of jobs including retail assistant, claims negotiator and project manager, but none was as exhausting as the several years he spent as a househusband with two pre-school children. Tom has been writing since the age of seven, and completed his first novel at fifteen. After twenty years and hundreds of rejection slips, his first novel SINS OF THE FATHER was published under his real name, David Harrison. With his next book, SKIN AND BONES, he acquired an agent, a pseudonym and a book deal that enabled him to write full time. His latest book is a blistering standalone thriller, SEE HOW THEY RUN.