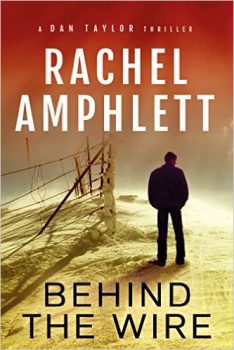 Behind the Wire (A Dan Taylor thriller)

Dan Taylor is trying to keep a low profile when an old friend contacts the Energy Protection Group seeking his help.

The man’s daughter is alone in sub-Saharan Africa, and her life is in grave danger.

Thrust back into active duty, Dan soon realises that getting Anna to safety is only half his problem. The forensic accountant holds the key to preventing Western Sahara descending into chaos, and exposing the puppet masters behind a coup d’état.

With a group of militants financed by a regime intent on acquiring mineral assets in the conflict-torn country in pursuit and willing to do anything to stop him, Dan must draw on old survival skills and luck to make sure Anna and the evidence she has in her possession reaches safety.

Behind the wire lies a secret – a secret that people will kill to protect.

BEHIND THE WIRE is available from Amazon, Amazon UK and Kobo.

Praise for the Dan Taylor series:

‘I’m not sure whether Rachel has some sort of inside line to what’s going on in the UK and the wider world, but her stories are scarily current.’ Goodreads

‘Rachel Amphlett is one of those rare authors who obviously has extensively researched the subject of each book, and thus makes each story believable and totally plausible.’ Goodreads

Before moving to Australia in 2005, Rachel Amphlett helped run a pub, played guitar in bands, worked as a TV and film extra, dabbled in radio as a presenter and freelance producer for the BBC, and worked in publishing as a sub-editor and editorial assistant.

She self-publishes her thrillers to a worldwide audience, with the Italian foreign rights for her debut novel, White Gold, being sold to Fanucci Editore’s TIMECrime imprint in 2014.