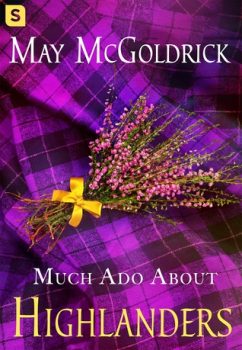 In the heart of Scotland, this Highlander is about to meet his match in a brand new romance from bestseller May McGoldrick.

Highland warrior Alexander Macpherson has lost his wife. When he agreed to take Kenna Mackay as his bride to advance his clan’s power in the north, he expected a bit of an adjustment. He didn’t expect the sharp-tongued beauty to run away on their wedding night. Still, Alexander wants his runaway bride…and he has the sneaking suspicion that she wants him, too.

Kenna Mackay thought she was safe in a priory full of nuns learning the craft of healing, but when she is kidnapped by her own husband, the battle of wits begins anew. But even as passions ignite, a deadly secret from Kenna’s past rises to the surface and put their new love in jeopardy. As a heartless villain closes in, two headstrong lovers find themselves locked in a struggle between evil and the power of undying love. And this time, Alexander is determined to not lose his wife again.

MUCH ADO ABOUT HIGHLANDERS is available from Amazon, Barnes & Noble and iTunes.

Bestselling and award-winning authors Nikoo and Jim McGoldrick published their first novel — a Highland romance called THE THISTLE AND THE ROSE — in 1995. Since then, writing under the names MAY MCGOLDRICK and Jan Coffey, they have published over thirty five novels and books, including historical romances, romantic suspense, young adult, and nonfiction. They make their home in Northwest Connecticut where they write during their eleven and a half months of snow and play tennis for the rest of the year. www.MayMcGoldrick.com