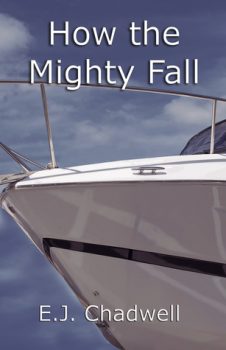 The mysterious disappearance of media mogul Connie Ross during a party on her yacht exposes a web of dark and twisted secrets. Jimmy Frail, Chief of Detectives, suspecting foul play and the potential media circus, partners a most unlikely pair of detectives. Gigi Mirabelli, a missing persons’ officer, is recalled early from maternity leave to work with Harry Burns, a brilliant, but tormented homicide detective looking to restart his sidelined career.

Suspecting murder, but unable and needing to prove it, Mirabelli and Burns must first find a way to work together before they can hope to solve this perplexing crime. They first develop a working partnership of opposites and then skillfully sift through the evidence; all while walking the political and media tightrope in this high profile case.

HOW THE MIGHTY FALL is available from Amazon, Kobo and the publisher’s website.

How the Mighty Fall by EJ Chadwell is a thriller of mammoth proportions. Connie Ross, powerful media mogul, has disappeared. She was last seen on her yacht at a party, but didn’t get off when the yacht docked. Now it’s down to missing persons’ officer Gigi Mirabella and homicide detective Harry Burns to uncover the truth, paired together by Chief of Detectives, Jimmy Frail. An unlikely pair, the detectives set out to prove that Connie was murdered, but without a body that might prove difficult. Their investigation leads them down a dark path, one that is full of twisted secrets. Secrets that someone didn’t want anyone to find out about. Secrets that will make the mighty fall.

How the Mighty Fall by EJ Chadwell is a first class detective story, absolutely chock full of exciting twists and turns. It is a well crafted tale that grabs reader attention right from the outset, written in an easy to understand style. The characters are well developed and the two detectives, although complete opposites, are written to draw a reader in, which they do. There is a vein of humor that runs through the story, giving it a bit of a lift and engaging the reader even further. The ending is a complete surprise. I certainly never thought of it and I guess that is the mark of a good writer – keep them guessing and then throw them a real curve ball! Excellent story, plenty of action and a great plot. Looking forward to reading more from this author, preferably with the same detective duo!

Dense and full of colorful characters, HOW THE MIGHTY FALL is an engaging, and at times funny, mystery.

E.J. Chadwell grew up in the South Bronx. As a latchkey kid, she spent most of her free time at the Mott Haven branch of the New York Public Library, where she developed a lifelong love of reading. Her father, a postal worker, and her mother, an office worker instilled in her the value of education. Chadwell graduated with a post graduate degree in library science, after which she worked for more than 10 years in print and broadcast media for a major newspaper, a national television talk show and a production house where she wrote script treatments for cable shows such as A&E’s The Unexplained, American Justice, and Biography. She has also worked as a publicist and a freelance journalist, publishing magazine articles before turning to books. A voracious reader of mysteries, Chadwell is an active member of Mystery Writers of America, International Thriller Writers, and Sisters in Crime.