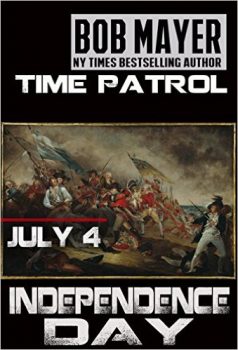 Same date; six different years, the Time Patrol must save our timeline from the Shadow by preserving our past.

On the 4th of July 362 B.C. is the Battle of Mantinea in Greece, in which Sparta is defeated by Thebes in a Pyrrhic victory, leading to a third party uniting Greece: Philip II, father of a man who would change history: Alexander The Great. But what if Sparta wins the battle?

The 4th of July, 1776 is one of the most important dates in American history, but there is also the 4th of July exactly 50 years later, in 1826, when two of the architects of that document and the country, Thomas Jefferson and John Adams, die within hours of each other. What secrets do they hold close on their deathbeds? And who else might know about them?

At Gettysburg, the Confederacy reaches its ‘high water mark’ with Pickett’s charge on the 3rd of July 1863. But on the 4th, both armies stare at each other on a rainy day, waiting for the other to make a move. What if the Union attacks?

In the same war, on the same day, in a victory that is over-shadowed by Gettysburg in terms of publicity, but of more value strategically, Grant takes Vicksburg on the 4th of July, 1863. But what if he fails?

All of these events, and others on the same day, are being attacked by the SHADOW.

It is up to the Time Patrol to send an agent back to six different years on the 4th of July and make sure our timeline remains intact. If they fail, our present will snap out of existence!

INDEPENDENCE DAY is available from Amazon.