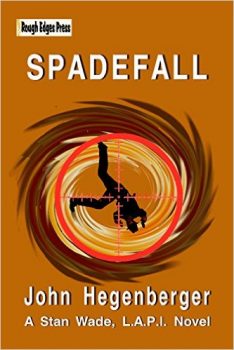 In December 1959, a hard-luck PI risks life and livelihood in search of a lost Hammett manuscript, where Sam Spade meets the Continental Op, and confronts a frustrated Hitchcock in Hollywood, a young Jack Ruby in Dallas, and a Neo-Nippon threat in America’s new 50th state.

It’s bullets, volcanoes, espionage, romance, humor, double-crosses, and pop culture references galore as Stan Wade races through another fast-moving, action-packed caper. John Hegenberger’s SPADEFALL is the latest entry in one of the best new private eye series in years and pure reading entertainment. Trying to keep up with Stan Wade is some of the most fun you’ll ever have in the pages of a book!

SPADEFALL is available from Amazon.