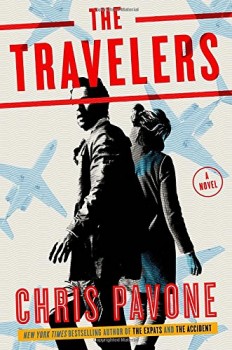 Chris Pavone likes to throw his heroes for a loop. Most of the time, they don’t even know they’re heroes yet. From expat mom Kate Moore to literary agent Isabel Reed, Pavone has crafted stories that pull seemingly normal people into dangerous worlds of menace and intrigue, forcing them to become much more than run-of-the-mill drones, and creating unforgettable thrillers in the process.

The trend continues with Pavone’s latest, THE TRAVELERS, a tightly plotted thrill-ride that takes burned-out journalist Will Rhodes from the nadir of his personal and professional life and catapults him into the deadly sphere of international espionage and double-crosses. Pavone’s knack for precise, impeccable pacing and layered, believable characters are on full display with THE TRAVELERS. The Big Thrill got the chance to ask Pavone a few questions about the book, which was released on March 8.

Chris, what can you tell us about Will Rhodes, the protagonist of your latest novel, THE TRAVELERS?

Will seems to have it all: recently married to the woman of his dreams, working in a glamorous job as European correspondent for Travelers magazine. But his marriage is in a sophomore slump, they’re completely broke, and Will is getting tired of a repetitive, exhausting job. He’s teetering on the cusp between optimism and disenchantment, between youth and middle age; Will still wants to believe that perfection is possible, but he’s confronting a lot of evidence to the contrary. And he’s about to make a huge mistake.

Will’s days are in a bit of a doldrums when we first meet him, before everything gets turned around. What is it that appeals to you about stories involving characters thrown into unexpected situations?

I like being able to imagine myself as the protagonist: what would I do? What decisions would I make? What chances would I take? I have a hard time doing this when it’s James Bond on the page.

What was the inspiration behind THE TRAVELERS?

I’ve had dozens of jobs, for all sorts of outfits: the federal government and the New York City Board of Ed., small and midsize businesses and international conglomerates, companies where I saw the owner every day and others where I didn’t know who the owner was, or what we were really up to. Maybe the publishing house was really a CIA propaganda operation? The law firm a money-laundering operation? Would the value of my labor change? Is it what you do that’s defining? Or why you’re doing it—for whose benefit? These questions started me thinking about a spy story in which the spies don’t really have the answers.

One of my summer jobs was at a small ad agency whose mandate was to produce multilingual campaigns. Everyone in the office was from somewhere else, and they all seemed to speak a half-dozen languages, smoking thin cigarettes and flying on a moment’s notice to Paris or Rio to meet with clients. Or at least that’s what they told me.

How does the new book continue the work you’ve started with The Expats and The Accident? How is it different from your first two books?

My novels all feature characters who tell important lies to the people with whom they’re closest, and all revolve a dominant central theme: The Expats was about marriage; The Accident, ambition; and THE TRAVELERS is about work.

But this new book tells a bigger story, with a broader cast who are in a wider assortment of antagonistic circumstances, plus there are implications to the world beyond the private lives of the characters; there’s a political element here. But I hope that the new book shares this in common with my first two: what you as a reader think is going on? That’s not what’s really going on.

You’ve been an editor and ghostwriter before becoming a novelist full-time. Is there a bit of you in Will?

Definitely! In fact there’s a bit of me in all my major characters, men and women, good and bad and in between. But all my characters are much braver and more competent than I am. Better looking to boot. And younger. More clever . . .

So I guess the bit that’s me is actually pretty small.

Ha! Don’t sell yourself short, sir. The book takes readers on a whirlwind tour of Europe. What is it about globe-hopping adventure that appeals to you as a writer?

Travel isn’t just about seeing new sights, eating new foods. It’s a way of shifting perspective, inhabiting a different sort of existence, and so becoming a different person. I think travel is a way for all of us real people to become a little fictionalized—more exciting, sexier, maybe more adventurous, more dangerous. And what’s exciting for real people can be even more exciting for fictional characters.

In this novel, travel is not just a physical journey but also emotional and professional ones, plus metaphoric too. This is also true of the book’s title, which references the name of the magazine where Will works, as well as other characters who don’t work there, as well as all of us readers too: we’re all travelers, on our way somewhere. Even reading the book is a journey itself.

You get a lot of praise for your plotting and pacing. Can you talk a little bit about your process? Do you outline heavily?

Thank you! I begin with the central circumstance and the fundamental plot twist, and sketches of the most important characters, but only a vague sense of the action. Then I start writing the text, but I’m not really sure what’s going to happen. After a while, though, reveals and complications and action sequences begin to present themselves, and at this point I stop writing and work on a detailed outline. Then I go back to the beginning and revise based.

As I move forward, I always come up with new tangents and twists and characters, even new endings. So I revise this outline, over and over.

Then editing! All sorts of things change after my agent gets his hands on it, then my editors. So far, all the manuscripts I’ve started writing have been very different from the books that were eventually published. Maybe next time I’ll simplify this process, but I doubt it. Ease of writing isn’t my goal.

How would you pitch THE TRAVELERS to someone who might not have read your first two novels? (Shame on them if they haven’t!)

A travel writer becomes a spy.

Short and sweet, I love it. Were there any particular books or authors (or TV, or movies) that inspired the writing of THE TRAVELERS?

I first imagined this story as a TV show, not a novel. So as I began to work on the characters and the story, I was trying to create a big world that could spin indefinitely, with a broad swath of characters in complex relationships that could evolve over time, with detailed back-stories and layered betrayals and an assortment of threats, both internal and external, not to mention an urgent central tension to each season.

When I decided to turn the story into a novel, I had to scale way back, focusing instead on just a few main characters and a manageable quantity of revelations. But hidden in the recesses of my hard drive are full seasons’ worth of life for characters who have only a few lines in the novel, tiny tips of deep icebergs.

In the end, I realized that although I think THE TRAVELERS might make a fantastic serial drama, no one in their right mind would ever allow me to make a TV show—including me! So instead we took an option for feature film.

There’s what I hope is a satisfying connection between THE TRAVELERS and The Accident, revealed late in the book; a tiny one occurs earlier. These are not even the tiniest detractions if you haven’t read the prior book, but enhancements if you have, a little bit of fun, which is an element of my quest to occupy the sweet spot between trivial and homework. 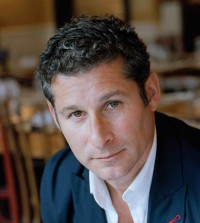 Chris Pavone’s first novel, The Expats, was a New York Times and international bestseller, with twenty foreign editions and a major film deal, and received both the Edgar and Anthony awards for Best First Novel. The Accident, published in March 2014, was also an instant New York Times bestseller. The Travelers will publish on March 8, 2016.

Chris grew up in New York City and attended Midwood High School in Brooklyn and then Cornell University. He was an editor at a number of publishing houses over nearly two decades, as well as a ghostwriter. Chris is married and the father of twin schoolboys, and they all live in New York City and on the North Fork of Long Island.