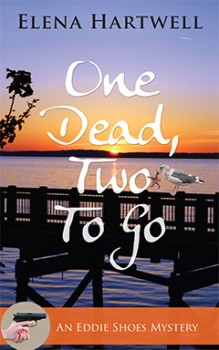 The woman that Private Investigator Eddie Shoes photographed kissing her client’s husband ends up dead. When Eddie’s client  disappears, Eddie wonders if she is being stiffed her fee, if her client is in trouble, or if she is the killer. Solving this mystery leads Eddie straight into trouble, followed quickly by her adrenaline-junkie gambling mother. To make matters even more interesting, Detective Chance Parker, Eddie’s ex, has moved to Bellingham and is the lead investigator on the homicide.

While Elena Hartwell’s novel ONE DEAD, TWO TO GO (an Eddie Shoes mystery) is her first foray into the literary world, she has been a playwright for more than twenty years. “I’ve always wanted to write a novel,” Hartwell says. “I wanted something tangible. A book on a shelf instead of just the memory of a production.”

Hartwell is not only excited about the permanency of her new novel, but about the opportunity for growth a literary work offers. “Mysteries can be done onstage, but it’s not that common,” says Hartwell. “Whereas, mystery novels and series are huge in the literary world. I wanted that experience.” Readers can look forward to at least two more novels in the Eddie Shoes series.

Hartwell’s main character was born out of a road trip conversation with her husband John “JD” Hammerly. When he mentioned the name, “I said, that would be a great name for a Private Eye.” “If Kinsey Millhone (Sue Grafton’s P.I.) and James Rockford (The Rockford Files) had a love child, she would be Eddie Shoes,” Hartwell says. In contrast, two other characters in the Eddie Shoes series “do have their feet in the real world.”

Detective Chance Parker is modeled after Hartwell’s horse, Second Chance. Hartwell adopted Second Chance after he was saved from the kill pen. While initially physically and psychologically “far gone,” Hartwell says, “after a year of groundwork he became a completely different horse.” Detective Parker sports many of Second Chance’s characteristics, including his brown hair with red highlights and some of his physical attributes—such as “standing on his toes, vibrating with nerves.”

The second character, Debbie Buse, will appear in Hartwell’s follow-up novel. Hartwell auctioned off a character during a Serenity Equine Rescue and Rehabilitation fundraiser. Hartwell named her character after her donator’s mother, “who is a lover of mysteries.”

“The real Debbie Buse is a bookkeeper, and my Debbie Buse owns a bookstore called The Book Keeper,” Hartwell says. Hartwell also plans to allow readers to propose names for a “certain canine (introduced in ONE DEAD, TWO TO GO) that is she going to continue to feature in the books.” Readers can visit Hartwell’s website for more information.

While Hartwell has found the actual writing of a novel relatively similar to writing a stage play, she certainly noticed the difference from the business side. “You can write a novel with a village, writing a play requires an entire country,” says Hartwell. While writing a novel might include some beta readers, a developmental editor, and someone to proofread a final copy, writing a play requires “various actors to read the various drafts, then, if you’re lucky you get an entire theatre company to produce a workshop.” From there, the search is on for theatres to produce a full production. “Even if you have an agent, you still have to keep finding theatres to produce your work or it remains unfinished,” Hartwell says.

“Another big difference,” Hartwell notes, “is point of view. As a novelist I’m writing in first person or third person limited. As a playwright, every character is written from their perspective because one living breathing actor is going to inhabit each character and they must feel as real as the next, and have their own point of view.”

Hartwell tries to complete her writing in the morning, when her “creative juices flow best.” “I like to have a cup of coffee with me,” she says. “Today I’m eating dark chocolate covered espresso beans, that might need to become a must have!” While Hartwell writes on a computer, she prefers to edit and do notes on hard copy. “I’m a person who writes for a bit, maybe twenty minutes, then I go get coffee. Or go play with the dog, then I come back and write another twenty minutes, and I’ll go on like that for a couple hours,” says Hartwell. Her favorite place to write is in hotel rooms.

Some of Hartwell’s primary literary influences include Sue Grafton, Michael Connelly  and Tony Hillerman. She also enjoys psychological mystery authors like Stephen White and Jonathan Kellerman. Hartwell says her tastes are eclectic, with an overflowing nightstand that includes some books on Forensic Psychology, several books and pamphlets about horses, and one of her all time favorite books, a signed copy of The Life We Bury.

“Keep writing and take in feedback from smart people,” Hartwell offers as advice for new writers. “Finished, in my opinion, is another misunderstood concept. Rewriting is the craft of being a writer. Finishing a first draft is a wonderful achievement, but a lot of people, especially early career writers, don’t realize how much a book can change through thoughtful rewrites.” As for feedback, “I think we have to develop skills to let us know when a piece of feedback is helpful or not and not fall into either taking everything or ignoring everything.”

Hartwell’s favorite part of being a writer is the flexibility. While she’s always “working” on a current project, when she’s not sitting at her computer, Hartwell loves to spend time with her horses and to travel. Look for Eddie to also travel to various places in future novels in the series, Hartwell says. “I love having Bellingham as Eddie’s home base, but I’m excited about her getting to travel.” 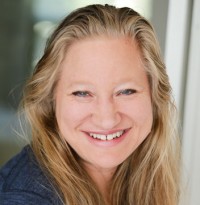 Elena Hartwell’s writing career began back in the ‘90s with the production of her first play, Playing Chess With Joey. Since that time, she’s had multiple productions of her dramas from San Diego to Seattle and across the country from New York City to Hattiesburg, Mississippi. She’s also had her work performed internationally in parts of Canada and the U.K.

A few years ago, she turned her interests to fiction. Coffeetown Press’s mystery imprint, Camel Press, will publish her first novel, One Dead, Two to Go on April 15, 2016. Two Dead Are Better Than One will launch in 2017, and Three Dead, You’re Out in 2018.