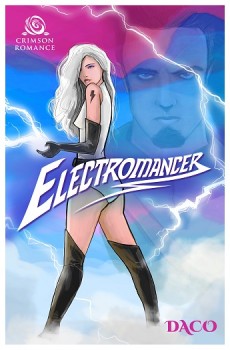 When heiress Alexa Manchester decides to gift her alternate world with unlimited energy, courtesy of her late father’s brilliant invention, she unwittingly captures the attention of supervillian crime boss, Momo. And after sabotaging the invention, Momo threatens to destroy the world unless everyone agrees to his demands. Only a superhero—or a super heroine—can stop him now.

Or maybe one of each.

In true Golden Age comic fashion, an accident with a hydroelectric generator transforms Alexa into Electromancer, a super hero who can harness electricity and fly. Aided by her sexy chauffeur, Sigfred Sawyer, a mysterious pet cat named Miss Marbletop, and the intoxicating superhero, The Blue Arrow, Alexa is more than up to the task of taking down Momo and his chief enforcer, the 4’11” hitman, Biggie Bitterman.

ELECTROMANCER is author Daco’s latest thriller, a follow-up to her #1 bestselling 2013 debut novel, The Libra Affair, and her 2015 short story, The Pisces Affair—a 2015 Global eBook Award double gold medalist, as well as a Shelf Unbound Notable 100 and Publishers Weekly Pick. Even Daco’s name is sort of thrilling. Her physicist father personally created the name by using the derivative (D) of acceleration (A) at the speed of light in cm per second (C) being equal to zero (O), where C is the same as in E = mC2. Daco is quite literally the speed of light.

How much more cool can a superhero author’s name get?

While it’s a campy throwback to the heroes of old, where world-ending action is paired with romance, and characters have fun and clever names like Professor Sivley Slipter and Conroy Corn, the characters are strongly written, and the conflicts feel real. The narrative is just as intelligent and thrilling as Daco’s more serious work.

Remember what it felt like to sit in the corner of the comic section and immerse yourself in an exciting tale of derring-do? Pick up a copy of ELECTROMANCER and feel that way again—without having to sit on the floor and hide from the store clerk. 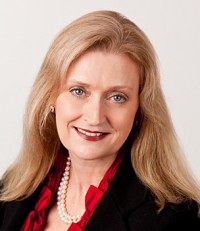 To learn more about Daco, please visit her website.