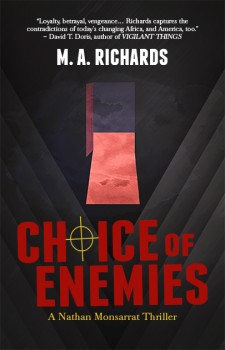 Think Tinker, Tailor, Soldier, Spy in Africa.  Revenge served cold amidst the bureaucratic bumbling inside the CIA as a political struggle unfolds. That is the thumbnail on CHOICE OF ENEMIES, a debut novel by M. A. Richards.

Richards was born and educated in Massachusetts and Connecticut.  He served more than two decades as a Cultural Attaché in the Department of State. Aside from assignments in Washington, D.C., his career took him to cities in Africa, Asia, Europe, and the Middle East, including Amman, Baghdad, Bangkok, Cape Town, Istanbul, Kuala Lumpur, Kuwait City, Jakarta, Jerusalem, Lagos, Moscow, Seoul, Singapore, Sydney, Tel Aviv, Tokyo, Ulan Bator, Vladivostok, and Wellington. He also served at the U.S. Pacific Command in Honolulu as the Special Advisor to the Commander.

How was CHOICE OF ENEMIES born?

When I served a year in Iraq, I spent a lot of time on Blackhawks, flying from Baghdad to Fallujah and Ramadi and back again. Strapped to a hard bench, I spent the time searching the skies for MANPAD flares and writing stories in my head. When I returned to the U.S., I was assigned as a Fellow at the Asia-Pacific Center for Security Studies, a wonderful experience that introduced me to a group of fascinating characters from countries as disparate as Pakistan and Japan. More importantly, for the first time since I joined the Department of State, I possessed blocks of time large enough to begin crafting a novel. I worked on two tracks at the Center—exploring links between jihadist groups in Asia, the Middle East, and Africa, and drafting the rough outline (more of a sketch, really) of a book based on my helicopter musings. During my stay at APCSS, the musings morphed into the first draft of CHOICE OF ENEMIES.

It is a story of international espionage that exposes the “DNA strands” that entangle the United States’ efforts to secure steady supplies of oil, destroy radical Islamic terrorist organizations, and guarantee that governments in strategic countries remain within its orbit (regime change is such a quaint expression). After retiring in 2013, I bought a new laptop and went at it.  Reams of (electronic) paper later, I sent query letters to agents and signed with Dean Krystek of Word|Link Agency. Dean placed the novel with Larry Knorr at Sunbury Press. It launched on January 10, 2016. My fingers are crossed (tough to type!) that Dean will soon secure a film deal—what a thrill it would be to watch my characters duel on the silver screen.

Readers would assume your career informed your writing. In what ways is that true?

I quit my graduate school MFA program because I had nothing to say, nothing to write. I had no experiences, had suffered no pains, had not been tested. I bought a backpack and hopped a cheap flight to Europe. Within forty-eight hours after arriving in Amsterdam, a 6’4”, 235 pound granite slab of a Canadian hockey player was chasing me through the Centraal District for sleeping with his girlfriend. If adventures were cherries in a slot machine, I’d be a wealthy man. Since Amsterdam, my life has been one long and curvy roller coaster of escapades, mostly courtesy of Uncle Sam, who sent me to all the cities (and more) that you listed in your introduction. The more time I spent in a place (for example, two years in Nigeria and a few months in South Africa), the more attuned I became to its culture, its politics, its history—how the people spoke, the tensions between ethnic and religious groups, and the subtleties behind the big picture plays—terrorism, oil, weapons (conventional and nuclear), human trafficking…all the nasty characters that escaped from Pandora’s box and continue to plague us. While I worked for Uncle Sam—seriously, a bitch mistress—I did not have the necessary blocks of time to write, but I collected the stories on sheets of legal paper, like Thomas Wolfe carrying his novels on cocktail napkins. A couple of years ago, I had to make a decision—keep fighting the good fight, or retire and pursue my dream—and CHOICE OF ENEMIES is the result. I miss my Cultural Attaché job—the challenges and the adventures and the camaraderie—but I love having the time to write!

What was your motivation for Nathan Monsarrat? Is he based on a real person?

CHOICE OF ENEMIES carries the usual disclaimer, but Monsarrat really is based on a witch’s brew of my imagination and people I knew during my Cultural Attaché days: a bat’s wing here, an eye of a newt there. Monsarrat started his literary life as a Bond-like character—handsome, physical, instinctive, dangerous—but as the book progressed, he morphed into a full-blooded, complex character, capable of introspection, doubt, and remorse. Still, if I had to go into a dark alley at night in one of the planet’s nastier shitholes to meet a scumbag like Felix Sanhedrin (Monsarrat’s bête noire), I would want Nathan at my side. One final thought: his surname is taken from my favorite avenue in Honolulu.

What is your writing process? Do you sit in an office and write from 9 to 5? Or do you write when the urge hits you and finish the novel whenever?

I belong to the anal retentive school of writing. No later than 0700 hours, I shut the door to my study, close the window shutters, and sit at a desk empty of everything save the laptop and notes (I like sticky notes and use blocks upon blocks of them, scribbling with an old fountain pen). No lights, save the glow of the laptop screen, and no sounds—no music, no television, no FaceTime/Skype, and no cell phone.  I work steadily until noon, unless I emerge from the womb of my study for more coffee and to use the head. At noon, I break for thirty minutes for lunch, standing at the kitchen counter. After lunch, I return to my desk for an additional ninety minutes, conducting research, jotting notes, and daydreaming. At 1400 hours, I shut down the laptop and head to the gym for a two hour workout—if I didn’t burn off the stress and excess energy, my wife would have divorced me six months after I began writing CHOICE OF ENEMIES.

Are you a seat of the pants writer? Or an outliner?

I’m neither a plotter nor an inspirational writer.  I’m a Thomas Wolfe kinda plodder. White boards and outlines are too organized for me. I write on the back of cocktail napkins in dark bars with cheap stick ballpoints (ink from cheap felt pens tend to run through the cheap napkins). One night, I fell in love, blistered by Irish whiskey, with sticky notes. You can paste them to anything for three minutes! A wise guy once tried to sell me some sorta thing he called a PDA…it had a high-tech pencil attached to it…meh…not for me. I told him where he could stick his pencil…which ruined the first chapter of my new novel, after I dabbed the blood from my split lip with the cocktail napkins.

Jerusalem—which plays a huge role in the second Nathan Monsarrat thriller, A THOUSAND ENEMIES—takes the honor of my favorite city. Despite the troubles which plague Jerusalem (the city deserves better), it is truly a magical place. Perched on its high hill, three thousand feet above sea level, Jerusalemites say that phoning the Lord is a local call—no roaming charges. Thousands of years of bloody history cloak the city (strife is not a recent guest to Jerusalem), bloody but also sad and fascinating. Beyond the problems, though, Jerusalem offers wonderful riches! The food, a mixture from every continent, is extraordinary. The sights—both the scenery and the people—are amazingly colorful. I especially loved to sit in the cafes on Yaffa Road on Friday morning, drink a strong afuch (Israeli cappuccino) as the Shabbat approached, and listen to discussions (think of arms flailing and hands waving and fists pounding tabletops) among customers old and young, liberal and conservative, in a Babel of languages—Hebrew, Arabic, Russian, English, French…mostly at the same time!

As for my least favorite city, some were easier to tolerate than others, and each provided its own challenges. My assignments were like children; I’m going to duck that question and just assert that I liked them all, for different reasons and in different ways.

If you could have done anything different in your life, what would it be?

And now for the deep philosophical question that gets right to the heart of you, M. A. Richards, the writer with only initials for a first name: You are kidnapped by a race of woodland faeries who believe you are a great sorcerer who can help them out of their troubles with the mountain trolls who insist that woodland faerie flesh is delicious when barbequed and are planning to host a feast to celebrate the oncoming spring. What do you tell the trolls when they show up to put you on the Barbie? And what is the beverage of choice for the party? And…why?

Hah! Lemme tell you—no mountain troll would dare mess with me. I have proteksia from the Russian mafiya! Masha Krupnik, CHOICE OF ENEMIES’ beautiful St. Petersburg vor relocated to Cape Town, South Africa, is in my corner. Not even barbeque-loving mountain trolls have the stones to piss off a woman like Masha. After we sort out who’s who on the menu of the day—you’re right about woodland faerie flesh; it’s quite tasty when seared at a high temperature in a Dijon mustard/honey/red chili pepper marinade—we can get down to the basics: do you like your seared woodland faerie with a Sam Adams lager, a Barefoot Merlot, or—my preference—four fingers of Elijah Craig 12 year old bourbon? 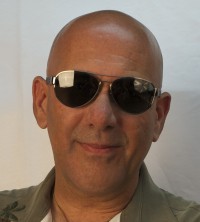 M. A. Richards is the author of the Nathan Monsarrat international espionage novels. Born in Lowell, Massachusetts, he received his Bachelor of Arts degree in Theater Studies from Connecticut College and his Master of Arts degree in English from the University of Massachusetts at Amherst. During a career as a Cultural Attaché in the Department of State that spanned more than two decades, he served in Baghdad, Jerusalem, Lagos, Moscow, Seoul, Tel Aviv, and Washington, D.C. He also served at U.S. Pacific Command in Honolulu as the Special Advisor to the Commander. He speaks Arabic, Hebrew, Korean, and Russian. M. A. divides his time between Palm Beach and Tel Aviv, where he indulges his passions for motorcycles, photography, and archaeology.

To learn more about M. A. Richards and Choice of Enemies, please visit his website.