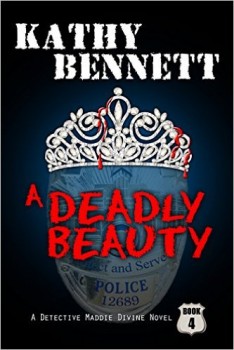 LAPD Detective Maddie Divine must search for the truth amidst secrets, lies and the scams of Hollywood. Her investigation intensifies when news breaks that two young pageant contestants have vanished. When Maddie uncovers a shocking secret it’s clear she’s searching for two different killers, not one. In a desperate race against time, Maddie leads an urgent manhunt to save each young beauty before it’s too late.

A DEADLY BEAUTY is available from Amazon, Barnes & Noble and iTunes.

Kathy served twenty-one years as a sworn police officer with the LAPD. She spent most of her career working patrol, but Kathy was also a firearms instructor, a crime analyst in the “War Room”, a field-training officer, a senior lead officer, and a plainclothes officer for various assignments. She was named Officer of the Year in 1997.

Kathy is now retired and lives in Idaho with her husband and their two energetic Labrador retrievers.

The Siege by Charlie Flowers