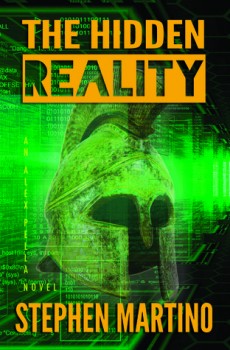 In the year 2084, the brilliant inventor, Alex Pella, finds himself at a precarious crossroad between the pursuit of justice and preservation of his own sanity. While attempting to undermine an international New World Order government created by the financial juggernaut known as The New Reality, he must also face the hidden truths about his own genetic heritage that are slowly destroying him. After receiving an ambiguous message sent from a former New Reality executive who died 2 years prior, Alex learns that the only possible means to confront this New World Order is to defeat a long-forgotten enemy almost 2500 years old.

I wrote The Hidden Reality more than just to entertain the reader. I wanted to create a modern day Orwellian ANIMAL FARM to allegorically forewarn his readers of a possible dystopia future that awaits all of mankind if humanity continues to proceed down its path of self-destruction.

I have also included such hot-button contemporary topics as genetic cloning, unprecedented economic debt, the rise of big government, and the threat of a New World Order run by the economic elite, while bringing the reader back almost 2500 years into the past when the ancient city state nation known as Greece fought the mighty Persian Empire for world domination.

THE HIDDEN REALITY is available from Amazon and Barnes & Noble.

By trade Stephen Martino is a board certified neurologist, practicing in New Jersey. He has been quoted in the local newspaper, publicized in a New Jersey medical flyer and featured on a major hospital system’s neuroscience website. He also is an avid educator, instructing both medical students and residents along with high school students, EMS squads and physicians throughout New Jersey. His dedication to the field of medicine has been recognized both nationally and locally.

Stephen Martino is active in his local community and is a member of the Knights of Columbus. When not working, he spends time with his wife and 5 children. Whether it be running a cub scout meeting, playing LEGOs on the floor, going to one of his kid’s soccer games or watching a school play, he is kept busy with their ever expanding activities.

Stephen Martino is also a dedicated researcher. With projects devoted to concussion, dementia and stroke, he hopes to help expand our understanding of these topics and find potential treatments for them in the future.