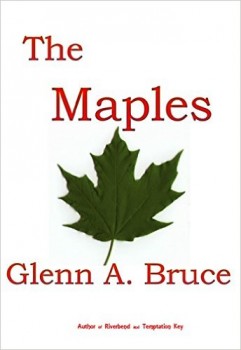 Ed and Evie Maples have four grown children: Janette, 28, who left Ohio the day she graduated and moved to Oregon; Toby, 25, who stayed, married “a terrific gal” named Margie, got a job in a mobile home factory; Darcy, 22, went to community college “to become a fireman”, is married and has a 3-year-old; Jonnie, just 19, now The Wild One with the blue-haired girlfriend. All gather one Friday at the Old Home Place for a family funeral only to discover that their father has changed–since Wednesday. To their shock and horror, he has become “nice.” Even Evie can’t explain it. Over the course of four days, Janette takes us on a hilarious trip down Maples Memory Lane to try and understand just what the hell has gotten into him. Along the way, greater mysteries are unearthed–some, literally–amidst the tragedies of life and a wildly dysfunctional extended family of crazy cousins and grandparents. The Maples is a comic delight told through the eyes of the family’s perennial misfit who has some of her own mysteries to solve.

THE MAPLES is available from Amazon and Barnes & Noble.

“It’s really exciting to have a copy of a book from someone I know personally. I’m enjoying all sides of the Maples family.” David Riddleberger

“Just started it and really enjoying it already!” Kiersten Houser

Glenn A. Bruce has an MFA in Writing and was associate editor for The Lindenwood Review. He has published five novels, two collections of original short stories, and one political opinion book (which cost him a few friends who later went on to support Donald Trump—so, it all worked out). His short stories have been published in Brilliant Flash Fiction, Shotgun Honey, Blue Crow, RedFez, Defenestration, Alfie Dog, LLR, Oval, Loud Zoo (Bedlam Publishing), The Rain, Party, & Disaster Society, and Green Silk Journal. He was a finalist in the Defenestrationism short story contest and judged the Brilliant Flash Fiction Fall 2015 writing contest. His poetry and nonfiction have appeared in Flights (Sinclair College Literary Journal), Lost Coast Review, Beat Poets of the Forever Generation, Carolina Mountain Life, and the Earthen Lamp Journal. He has published five novels and two short story collections. Glenn also wrote the hit film Kickboxer as well as for television shows Walker: Texas Ranger, Baywatch, and Assaulted Nuts. Many of his other feature film screenplays and television series concepts have been optioned and almost saw the light of a screen. He currently has several more in development.