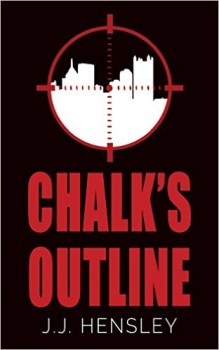 Today, Robert Chalk has a rifle, a plan, and a target.

When Cyprus Keller and his wife Kaitlyn relocated to rural Virginia, they did all they could to put the past behind them. However, the situation becomes uncomfortable when Jackson Channing appears in Keller’s living room and begins questioning Keller about the past. The situation becomes unbearable when bullets start flying through the front window.

In a flash, it becomes apparent that Jackson Channing is not the only person who has an interest in Keller. If Channing wants to unravel Keller’s past, he is going to have to make sure the professor has a future. To keep Keller safe and uncover the mystery of who wants him dead, Channing takes Keller and his wife to Pittsburgh, where it all started.

As a deadly chess game plays out in the city streets, Channing discovers Keller is a complicated man of secrets who is anything but a typical murder suspect. The two men team up in an effort to stop a dangerous assassin who intends on killing Keller, no matter the cost. As Robert Chalk works his way through the plan he has outlined, he becomes consumed with the ultimate goal. No matter how many lives he has to take along the way, Cyprus Keller must die.

CHALK’S OUTLINE is available from Amazon.

J.J. Hensley is a former police officer and Special Agent with the U.S. Secret Service who has drawn upon his experiences in law enforcement to write stories full of mystery, suspense, and insight. Hensley graduated from Penn State University with a B.S. in Administration of Justice and has a M.S. degree in Criminal Justice Administration from Columbia Southern University. The author lives near Pittsburgh, Pennsylvania.

Mr. Hensley’s novel RESOLVE was named one of the BEST BOOKS OF 2013 by Suspense Magazine and was named a THRILLERFEST finalist for Best First Novel. He is a member of the International Thriller Writers and Sisters in Crime.