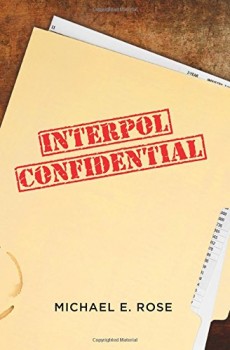 A scathing satire about Interpol, by the organization’s former Chief of Communications, Michael E. Rose.

In the run-up to Interpol’s General Assembly, something is truly amiss. The world’s largest international police organisation is heaving with internal strife, petty rivalries, and treachery.

For the Secretary General, re-election is not enough. What he wants is a unanimous victory and he is willing to go to any lengths to secure it. It will not be easy. Not only are others, both inside and outside Interpol, trying to stop his re-election, but some hate him so much that they are plotting his ultimate humiliation. His enemies are legion; that much is clear. What is less clear is who exactly is plotting against him, and which of his many, many transgressions they want revenge for.

Michael E. Rose is a Canadian author, journalist and broadcaster. He is also the former Chief of Communications
for Interpol at the agency’s global headquarters in Lyon, France.

His usual genre is spy thrillers, with the Frank Delaney series winning new readers year after year. The
first thriller in that series, The Mazovia Legacy, won critical acclaim and was shortlisted in the prestigious Arthur Ellis Awards for Best First Novel. The second volume, The Burma Effect, drew similar attention. The third, The Tsunami File, was shortlisted in the Arthur Ellis Awards for Best Crime Novel of 2009.

Rose now lives with his Australian wife and Burmese cat in Sydney. For more about him and his books, visit
www.michaelrosemedia.com.