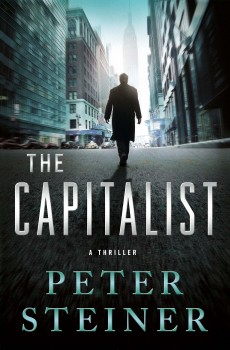 In THE CAPITALIST, St. John Larrimer’s fraudulent financial investment is revealed and he flees to his luxurious Caribbean retreat.  The money of course has been safely laundered in real estate and off-shore accounts.  “It’s how capitalism works,” says Larrimer.  It’s Darwin, with cash.  Unfortunately for him, Louis Morgon, a defrocked CIA operative, is one of Larrimer’s victims.  Louis didn’t lose much, but Pauline, his lover, did, and worse, her brother, who was responsible for their investments, took his own life.  For Louis Morgon, injustice on this order is an itch that has to be scratched.  And he’s not above a little fraud of his own to bring Larrimer down.

Besides writing novels, the author has made a living as cartoonist for The New Yorker.  In this novel one can perceive the distilled and elegant sarcasm that you find in good cartoons, except this time he’s using the words instead of the image.

The Big Thrill had the chance to catch up with Peter Steiner, who gently answers our questions.

Where did the idea for THE CAPITALIST come from?

I wanted to write about the excess and corruption of contemporary American capitalism, so I invented a thieving Wall Street capitalist and allowed the story to evolve from there.  I knew that Louis Morgon was going to somehow come into the story, but I didn’t know how until he appeared on the scene.

What can you tell us about the protagonist?

Morgon is a 75-year-old defrocked CIA agent who lives in France.  He has been in all  of my books.  This is his fifth appearance.  He lives in France and, though he tries his best to stay out of trouble, it always seems to find him.

Without giving away the ending, what can you share with us about the antagonist?

St. John Larrimer is a smart and ruthless Yale graduate who goes into finance for two reasons: it is a world of slippery ethics and the shortest way to great wealth.  Thanks to his misdeeds on Wall Street, his world intersects with Louis’s.

I did a lot of reading beforehand about Wall Street and the banking sector.  I also read up on Pakistan, which is where the story begins, on Russia, etc.  In fact, given the way I write (without a plan or plot beforehand) and the instant availability of information on the Internet, I researched as the need arose,

Nope, but I have attached a copy of a cartoon I did to promote the book. 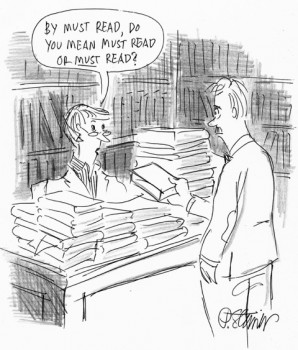 Speaking of cartoons, your most famous piece with the legend “In the Internet nobody knows you’re a dog,” has become a staple of Internet humor. It originally represented your dislike of the web back then, but 23 years later, has your relationship with it improved at all?

I’m a regular user of the Internet, so I’m not a complete netphobe.  But I think it’s an extremely dangerous and eventually injurious thing.  First off, I find it to be a colossal time waster.  More importantly, I think it is seriously and permanently damaging our humanity.  Facebook, Twitter and other so-called social media seem anti-social to me. They appeal to both our voyeuristic and exhibitionistic tendencies in dangerous ways.  Truth, factuality, civility and other civilizing characteristics of our selves are being eroded and severely damaged by the Internet.  The Internet encourages sociopathy and isolation.  And we are becoming stupider as a people.  Other than that, I think it’s wonderful.

I’m well into another Louis Morgon novel.  And I’m working on getting my new graphic novel called An Atheist in Heaven out, probably as a limited edition art book.

What is the one question about your books that you feel has never been asked?

I’ve never been asked why my books are so un-thrilling if they’re supposedly thrillers?  There are no car chases, little violence, and no gunplay.  One shot is fired in THE CAPITALIST. In fact it’s true: I can’t write conventional thrillers.  I’m too interested in writing about real life.

In my books you often know who done it.  The story is about how he’s going to get what’s coming to him.  The thrill comes (I hope) from the journey, not from violence, sadism, explosions, or other programmed mayhem.  I am interested in human characters with all their inherent contradictions and complexities. No one is all good or evil; everyone is a real and confusing mix.  They behave in surprising and unpredictable ways, especially when their lives get difficult.  And the outcomes of their interactions are almost never possible to predict.  Add to that the fact that I’m a humorist in some sense, or at least an ironist, and that I’m optimistic about the human spirit, if not the world, then . . .  well, there’s the answer to the never-asked question. 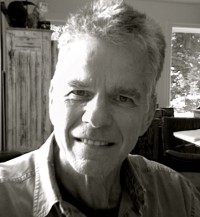 Peter Steiner is a Cincinnati native.  He did a stint in the Army, followed by graduate school.  He then got a PhD. and taught German at Dickinson College.  He left teaching to become an artist, painting and drawing cartoons.  In 1979 he began selling cartoons to The New Yorker. For the next 25 years he made his living mainly as a cartoonist, but also as a painter.  In the 1990s he started writing novels.  Although the first one went unpublished, the second one—A French Country Murder–was published by Saint Martin’s Press in 2003.  Since then other books followed. THE CAPITALIST is his fifth novel.