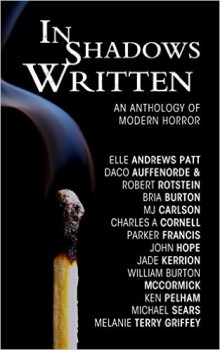 Twelve stories by thirteen authors, including five members of the International Thriller Writers. IN SHADOWS WRITTEN: An Anthology of Modern Horror takes a dark, winding tour of horror fiction.

The twelve stories comprising In Shadows Written: An Anthology of Modern Horror takes us into the hearts and minds of thirteen award-winning authors. Explore the wide reach of horror fiction of the early 21st century.

“Familiar” by Ken Pelham. Is it research or witchcraft? Science or magic? A young Bostonian discovers the connection between her disintegrating marriage and a mysterious accident on the dark wet highway to Salem.

“The Legend of Johnny Bell” by Elle Andrews Patt. Ah, Johnny Bell. His heart is in the right place, but he’s not the sharpest machete in the zombie apocalypse. Finally, an author has found a good use for Pomeranians.

“The Antiquary’s Wife” by William Burton McCormick. Folk legend, prejudice, and suspicion haunt a young American couple traveling the Ukrainian countryside of the 19th century. This novelette was a Finalist for the prestigious Derringer Award.

“Kev” by Michael Sears. Two boys out on a late-night lark, looking for thrills, a little breaking and entering. You take into account the things that could go wrong but forget that the world has real-life flesh and blood monsters among its vast web of living things.

“Insecurity Complex” by Jade Kerrion. What’s a self-respecting ghost to do when everyone is so over-entertained with their gadgets and personal electronics? Short, sweet, and funny. Winner of the Royal Palm Literary Award.

“A Dream Within a Dream” by Bria Burton. Our memories and realities are shaped by that which we need to be true. A young girl struggles through family tragedy in this haunting story inspired by Edgar Allan Poe.

“Texting April” by Parker Francis. Consumer electronics puts a horrifying spin on the traditional ghost story. Text messages will never be the same. Winner of the Royal Palm Literary Award.

“Gabriel” by Melanie Terry Griffey. We’ve all brought home a stray at one time or another, and loved that poor beast as if it were family. Not all strays are what they seem. Winner of the 2010 Flights of Fantasy award.

“The Alexandrite Necklace” by Daco Auffenorde and Robert Rotstein. Vanity, jealousy, and jewelry to die for steer a Hollywood actress on an upward career arc. But every arc must ultimately reach a zenith. A modern retelling of Guy de Maupassant’s “The Necklace.”

“Beating Cats” by John Hope. Addiction preys upon innocence in this dark, disturbing tour of the human psyche, the monsters within us, and the slide into depravity.

“Die Fabrik (The Factory)” by Charles A. Cornell. In a dieselpunk vision of Nazi Germany, weapons research and genocide become one in a nightmarish, secret factory in this novella.

IN SHADOWS WRITTEN is available from Amazon, Barnes & Noble and Kobo.

Ken Pelham’s debut novel, Brigands Key, a first-place winner of the Royal Palm Literary Award, was published in hardcover in 2012, in softcover in 2014, and in audiobook in 2015. The prequel, Place of Fear, a 2012 first-place winner of the Royal Palm, was released in 2013. A short story, “The Wreck of the Edinburgh Kate,” garnered second-place in 2014. He is a cofounder of the groundbreaking science fiction anthology, The Prometheus Saga.
Ken often gives seminars on the craft and publication of writing. Out of Sight, Out of Mind: A Writer’s Guide to Mastering Viewpoint, was named 2015 Book of the Year by the Florida Writers Association and has been translated into Italian, Spanish, and Portuguese. Great Danger: A Writer’s Guide to Building Suspense has been translated into Italian. He’s written, published, and presented numerous times on the natural and built environments.

Ken lives in Maitland, Florida, and is a member of the International Thriller Writers and the Florida Writers Association. Drop in and visit him at www.kenpelham.com.

William Burton McCormick is a novelist and short-story author whose work primarily focuses on thrillers and historical fiction set in Eastern Europe. A member of International Thriller Writers, he is a three-time Derringer Award finalist, given to the year’s best mystery fiction, and was elected a Hawthornden Writing Fellow in Scotland in 2013. His novel of 20th century Latvia, Lenin’s Harem became the only work of fiction ever added to the Latvian War Museum’s permanent library. His short stories have appeared in Alfred Hitchcock’s Mystery Magazine, Sherlock Holmes Mystery Magazine, Ellery Queen Mystery Magazine, and The Saturday Evening Post.
A world-traveler, William has lived in seven countries, including Russia and Ukraine, the settings of “The Antiquary’s Wife.”

Robert Rotstein is the author of The Bomb Maker’s Son (2015), about lawyer Parker Stern, who takes on representation of a fugitive accused of a 1970s terrorist bombing. Rotstein’s Reckless Disregard was a Kirkus Reviews top thriller of 2014, and Corrupt Practices received a Booklist starred review. He practices intellectual property law with Los Angeles firm Mitchell, Silberberg & Knupp, LLP, and has represented all the major movie studios and record companies, as well as many directors and writers.

Reckless Disregard:
“Endless novelties, endless twists, endless complications… Whatever you read legal drama for, it’s here, along with a whole lot of other stuff you never thought to ask for.” —Kirkus Reviews STARRED review

Corrupt Practices:
“A terrific book. Just terrific. Rotstein has come up with a fresh take on the legal thriller and he does a first-rate job. Beautifully structured for maximum intrigue and suspense.” —SUE GRAFTON, #1 New York Times–bestselling author

“An intelligent, fast-paced, exciting thriller with an intricate plot that kept me on the edge of my seat. The ending had my heart pounding. I stayed up late, finished it in two sittings, and wished there had been more.” —ROBERT DUGONI, New York Times–bestselling author

In 2015, “The Pisces Affair” won golds in the Global Ebook Awards (Best Thriller, Best Science Fiction), a Shelf Unbound Notable 100, a Royal Palm Literary Award, and a Publishers Weekly “PW Pick”. Says Publishers Weekly: “Jakes is a lively and witty narrator with the skills of James Bond, and readers will savor her fresh perspective in the male-dominated spy world.”

Michael Sears’ first novel, the best-seller Black Fridays, a thriller with a financial twist, took the Shamus award and was short-listed for the Edgar and three other major awards. Mortal Bonds, the critically-acclaimed second novel in the Jason Stafford series, won the Silver Falchion at Killer Nashville. Continuing the series, Long Way Down, was described as “one of the best thrillers of 2015.” Saving Jason, the fourth in the series, is due from Putnam in February, 2016.

Michael is a member of International Thriller Writers. Check in with him at www.michaelsears.com.