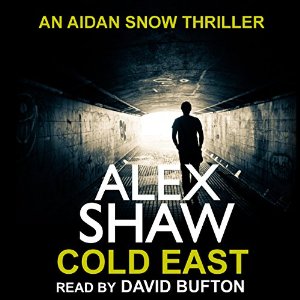 In the United States, a terrorist attack is thwarted by a man who does not exist.

In Russia, a notorious Chechen terrorist escapes from the nation’s most secure prison.

And in Afghanistan, a Red Army soldier long given up for dead delivers a chilling message: Al-Qaeda has an RA-115A, otherwise known as a suitcase nuke.

As the connection between these separate events begins to become clearer, MI6 and the CIA must attempt to prevent the world’s first act of nuclear terrorism.

But who has the weapon, and what is the target?

Stretching from London to Langley, Virginia, from Afghanistan to Chechnya and the Caucasus, intelligence services the world over must work together to foil the terrorist threat that lurks in the shadows.

The clock is ticking. And you never know who you can trust.

Aidan Snow faces his biggest challenge yet, and if he fails, thousands will be incinerated.

COLD EAST is available from Amazon.

Alex Shaw spent the second half of the 1990s in Kyiv, Ukraine, teaching and running his own business consultancy before being head-hunted for a division of Siemens. The next few years saw him doing business for the company across the former USSR, the Middle East, and Africa. He is a member of the International Thriller Writers organisation, the Crime Writers Association and the author of the Aidan Snow SAS thrillers.Alex, his wife and their two sons divide their time between homes in Kyiv, Ukraine and Worthing, England. Alex can be contacted via his website www.alexshaw.com or you can follow him on twitter: @alexshawhetman