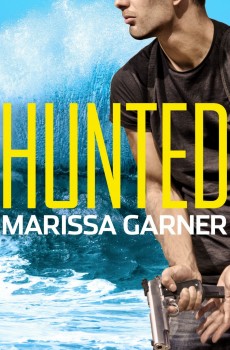 Marissa Garner is celebrating the release of her debut romantic thriller, HUNTED, book one in the FBI Heat series about hot agents on explosive cases.

Garner has always been a huge fan of romantic suspense and romantic thrillers. She also enjoys non-romance versions of these genres, but finds the combination of love story and intrigue more compelling. Hundreds of books by Sandra Brown, Linda Howard, Lisa Jackson, Brenda Novak, Iris Johansen, Anne Stuart, and Allison Brennan taught her many important elements of writing—the challenge has been to take what she’s learned and create her own style, her own brand.

Garner devises plots like a roller coaster architect, designing heart-stopping highs, lunch-losing lows, and scream-inducing twists. Her romantic thrillers are edgy and action-packed. She hopes the suspense will keep readers awake long after they’ve put the book on their nightstands. She believes her readers are smart, so she subtly plants clues instead of browbeating readers with them. Her characters are often flawed, sometimes initially unlikable, but always redeemable in the end.

Garner’s stories focus on subjects that are unusual in the romance culture. She remembers getting burned out on a popular type of villain a few years ago. Figuring she wasn’t alone, Garner creates diverse plots, which sometimes require diplomatic negotiations with her publisher. Fortunately, her editor has been open to most of her ideas—so far.

HUNTED includes plot elements of a surrogate mother clinic, a kidnapping, a stalker, and human trafficking. Garner worked hard to weave in the threads in unexpected ways. Future books in the series will include a dirty bomb plot, a Mexican drug cartel, a terrorist cell, a nuclear power plant, and Chinese hackers. Grand Central Publishing’s Forever Yours imprint will release Targeted and Wanted in 2016.

Marissa Garner is a wife, writer, chocoholic, and animal lover, not necessarily in that order. As a little girl, she cut pictures of people out of her mother’s magazines and turned them into characters in her simple stories. Now she writes edgy romantic thrillers, steamy contemporary romance, and sexy paranormal romantic suspense. Her stories will titillate your mind as well as your libido. She lives in sunny Southern California with her husband, but enjoys traveling from Athens to Anchorage to Acapulco and many locations in between.