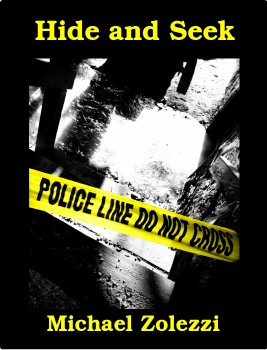 Michael Zolezzi is a veteran detective with the Los Angeles Police Department.  The author answered a few questions about his new novel for THE BIG THRILL.

Tell us about HIDE AND SEEK.

There are certain criminal cases that are talked about generations after the investigation is closed. I’m talking about the big ones, the OJ Simpsons, Scott Petersons, and the Grim Sleeper type of investigation, the big news media type of case.  They are biopsied, broken down, with every move by the detective analyzed. These cases can make legends or goats out of the investigators.

In HIDE AND SEEK, such a case lands in Detective Jake Skinner and his partner, Detective Dan Rico’s, laps. Having just transferred from South Bureau Homicide, Jake thought taking down an armed bank robber on his first day was as wild as the ride got. He was wrong.

The kidnapping of the wife of the mayor of Los Angeles, who also happens to be a federal prosecutor, threatens the core of one of the world’s most famous cities. An internal power struggle, false leads, meddling media, the victim’s own family, and Jake’s personal struggles all threaten to derail the investigation, an investigation that leads to pure evil.

You are a Los Angeles police detective. Tell us what motivated you to become a writer.

I have worked for the Los Angeles Police Department for over 20 years.  During my early years, I started to become jaded, and a little detached from the community that I served.  It affected not only me, but everyone around me.  Ask my wife.  I needed an outlet to take me away from what I saw every day, from what I was becoming.  I always loved writing, so I set out and wrote a really bad novel that was promptly rejected by every agent and publisher.

Not being a quitter, I continued to write, this time in the screenplay medium.  Early on, I had some encouraging comments about my writing and stories from several major studios.  But then life changed, and I started a family.  After a several year hiatus, I once again started to write screenplays, including an early version of HIDE AND SEEK.  I entered the screenplay into several competitions, placing in most and winning a few.

Then Christopher Dorner happened.  I was the last person on the department to deal with the troubled former LAPD Officer.  While I can’t speak about what my dealings with him were, due to the confidentiality of the matter, the interactions were cordial. When I heard about the manifesto, I didn’t feel threatened, in fact he mentions me in somewhat of a positive light in his ramblings.  However, the department felt it was in my interest to send a protection detail to my residence.  That may have saved my family’s life.  In the early morning hours, officers assigned to protect me and my family ran into Dorner down the street from my house.  The ensuing gun battle left an officer injured with a grazing gunshot wound to his head.  The following days became the biggest manhunt in the LAPD’s history.

The sociopath that Dorner was inspired the creation of the antagonist in my debut novel, HIDE AND SEEK.

So is this book the start of a new detective series?

Well, I certainly left an opening for a sequel as I didn’t kill off my protagonist.  And to answer the question, yes, there will be a second novel.  After the completion of my current manuscript, a middle-grader thriller/mystery, I plan to start the follow-up Jake Skinner novel.