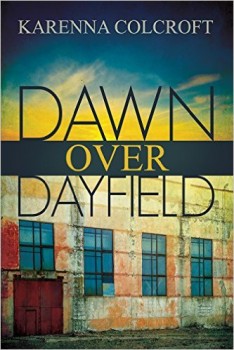 The Big Thrill interviewed Colcroft via email in January to get the scoop on this daringly different and powerfully written new release—and her answers are as intriguing as her thriller debut.

DAWN OVER DAYFIELD is a dramatic change of pace for you. What made you decide to branch into mystery/suspense?

The hero in DAWN OVER DAYFIELD is a young gay man searching for his birth parents. What inspired this combination of characteristics—gay and adopted?

Andy is gay because my original plan for the novel was a male/male romance, meaning both main characters had to be gay men. He is adopted because the story was initially inspired by a friend of mine who had written his family’s genealogy. When he was telling me about the research he had done, and that much of it had involved traveling to small-town libraries and historical societies around Massachusetts, the first thing that popped into my brain was “I need to write a male/male romance; it would be kind of cool to have one guy be a historical librarian, and the other be looking into his family’s past for some reason.”

How will your loyal readers react to this novel?

I haven’t really given a lot of thought to that. I’m hoping my readers will just be glad to see a new release from me since it’s been a while. I don’t think anyone will be disappointed unless they’re reading for the romance and sex, because Weston and Andy are very much typical Karenna Colcroft characters. I think readers will like seeing how the plot threads tie together. I hope the book will also broaden my following, because readers who might not be interested in romance might pick up this book and hopefully enjoy it.

One of the editors who worked on DAWN OVER DAYFIELD commented that the town you created—Dayfield—is as much of a character as the people in the book. What is so special about Dayfield, and how did you go about creating the place?

Dayfield is kind of the opposite of special. It’s a very depressed town, which began its death throes when the furniture factory that was the primary source of employment in town closed in the 1980s, and was pretty much finished off in 2011 when a massive tornado struck the area. (The tornado was real, striking Springfield, Massachusetts and a great deal of the surrounding area.) Because of these things, Dayfield has a very negative energy about it. People who live there often want to leave but can’t afford to, or, like Weston, are sucked into staying by family. Small towns bury their secrets—and will go to almost any lengths to keep them buried.

What got you started writing novels?

How has your work evolved?

That first story was relatively poorly-written. Not much emotional reaction on the part of the characters. Not much detail about the physical reactions, either. I’ve learned a lot about writing since then, and my skill has improved vastly. I’m far from perfect, and I don’t believe writing is a thing that will ever fully be mastered, but when I compare my current writing with the stuff from back then, the improvement is very noticeable.

In addition to the Colcroft works, you write young adult LGBT fiction under the name Jo Ramsey. What motivated you to get into this genre?

I’ve been writing young adult fiction since I was a teen myself. At that time, it was a way of helping myself cope with the problems in my life. I continued writing it as I grew up because I enjoyed it, and because I worked in education for a number of years, and many of my students were in the age range for YA.

Your journey as a novelist has included some adventures and misadventures in finding a good publisher. What advice do you have for emerging authors about finding a publisher?

Seriously, thanks to the internet there are a number of resources available for authors to find out more about a publisher or agent they’re considering. Sites like the Bewares, Background Checks, and Recommendations sub-forum on the Absolute Writer Water Cooler, where authors can share information or ask questions about publishers and agents, or Writer Beware, which lists potential problems with specific publishers.

Nowadays, anyone can say, “Hey, I’m a publisher” and use technology to create books, but that doesn’t mean they understand the publishing business—or any business whatsoever. People are constantly being sucked into companies that are not reputable or don’t know how to manage finances and business, or that start with good intentions and then go under almost immediately. It’s so easy to avoid becoming stuck in a situation like that, as long as you take the time to find out more about the publisher than what they say about themselves.

To learn more about Karenna, please visit her website.